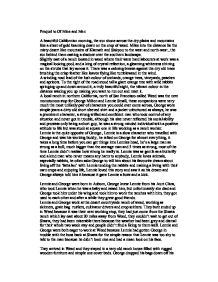 Prequel to Of Mice and Men

Prequel to Of Mice and Men A beautiful Californian morning, the sun shone across the dry plains and mountains like a sheet of gold beaming down on the crop of weed. Miles into the distance lie the misty desert like mountains of Klamath and Siskyou to the west and north-west , the sun behind them casting a shadow over the southern landscape. Slightly east of a ranch located in weed where their were hard labourers at work was a magical looking pool, and a king of crystal reflection, a gleaming whiteness shining on the shrubs that lay across it. There was a calming breeze against the dry old trees brushing the crisp feather like leaves flying like tumbleweed in the wind. A winding road lead of the lush colour of orchards, orange trees, vineyards, peaches and apricots. To the right of the road stood tall a giant orange tree with wild rabbits springing up and down around it, a truly beautiful sight, the vibrant colour in the distance waking you up making you want to run out and meet it. A local ranch in northern California, north of San Francisco called Weed was the next monotonous stop for George Milton and Lennie Small, these companions were very much the most unlikely pair of characters you could ever come across, George wore simple jeans a dirty old short sleeved shirt and a ...read more.

''She's the boss's daughter I believe, she doesn't come here often, she just comes to visit her father once in a while, she loves it here, all peaceful and all o' men, the hell I do for a gal like her'', Jackson replied with a sigh. ''then why don't you go out there and talk to her?'' asked Lennie still staring at the beautifully coloured girl. ''Hell no, if the boss finds out I been talking to his daughter he'd kick me out of the ranch without any pay! it's a fools game to go playing around with any boss's daughter''. George with his hands on his hips turned away and said, ''Yeah well that's just another thing guys like us cant have in this world''. Jackson looked at George and sighed once more and walked out past Lennie who was still stood at the door. ''What you doin' Lennie?''. Lennie looked straight to the floor and replied, N..n...nothing George I was, I was jus' looking at that pretty lady out on the....the'', before Lennie could finish George interrupted and walked up to Lennie and said in a unwelcoming manor, ''Listen Lennie, you stay away from her you hear me?'' ''Yes George'', said Lennie in an apologetic sense. ''I mean it Lennie, stay away from her and stay out o' trouble''. ...read more.

Lennie and George sprinted as fast as they could running down the left edge of the field, the dogs and the angry mob were just popping over the view of George and Lennie, ''Quick down here'', George shouted as he grabbed Lennie's arm and tugged him into the warm unpleasant water, there was a big splash as Lennie entered the water, ''Come to the edge Lennie quick!'', ordered George, Lennie scuttled moving great forces of water to reach George. They both cooped themselves tight against the bank hiding among reeds hoping not to be seen by a passing patrol, ''Now keep quiet Lennie, we don't want to get into any more trouble'', Said George, ''Ok George im sorry I didn't mean to get in no trouble I didn't'', Lennie answered while covering his head with wild grass. The day went on longingly, with them still hiding from the men back in the ranch who still pursued their search. To the south west there was a great wood filled with pine trees standing tall, the sun was setting casting a reddened shadow across them. ''When it gets dark enough Lennie were going to make our way over in them trees'', George said sternly, ''Ok George ok''. The sun set still leaving a glow over the vast landscape, George and Lennie made their way into the woods. A few miles south of Soledad, the Salinas river drops in close to the hillside bank and runs deep and green.......................................... ?? ?? ?? ?? ...read more.