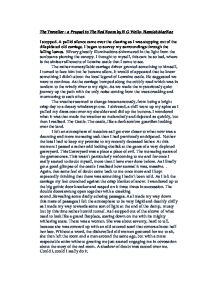 The Traveller - a Prequel to The Red Room by H G Wells- Hamish MacRae I stopped. A pallid silence came over the clearing as I was stepping out of the dilapidated old carriage. I began to survey my surroundings through the falling leaves. Silvery ghostly illuminations shimmered in the light from the sunbeams piercing the canopy. I thought to myself, this cant be so bad, where is the sinister silhouette of Loraine castle that I came to see. The rather monosyllabic carriage driver grunted something to himself, I turned to face him but he became silent. It would of appeared that he knew something I didn't about the local legend of Lorraine castle. He suggested we were to continue. ...read more.

The Castle. The castle, like a dark sombre guardian looking over the land. I felt an atmosphere of macabre as I got ever closer to what now was a daunting and more menacing task than I had previously anticipated. Nether the less I had to keep my promise to my recently deceased father. At this moment I passed a rather odd looking obelisk at the gates of a very depleted graveyard. This Graveyard was a place a place of evil. The menacing stares of the gravestones .This wasn't particularly welcoming to me and for once I really started to doubt myself, more than I have ever done before. As I finally got a good glimpse of the castle I realised how surreal it was, massive. ...read more.

As I stepped out of the alcove of what used to look like a grand fireplace, staring down on me with its mighty withering stare. There was a women. She was about seventy, hard to tell, because she was covered up with an old tattered scarf that covers almost half her face. Without a word, the dishevelled old women gestured for me to sit, she then left the room and a man around the same age, but with a more respectable attire without greeting me just started engaging me in covosation about the story of the red room. A shadow of doubt was casted over me. Could i, could I really do it. Could I spend a night in the red room? ...read more.