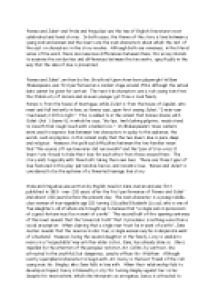 ﻿?Romeo and Juliet? and ?Pride and Prejudice? are the two of English literature?s most celebrated and loved stories. In both cases, the theme of the story is love between a young man and women and the lovers are the main characters about which the rest of the cast or characters in the story revolve. Although both are romances, in the literal sense of the word, there are numerous differences between them; this essay intends to examine the similarities and differences between the two works, specifically in the way that the idea of love is presented. ?Romeo and Juliet?, written by the Stratford-Upon-Avon?born playwright William Shakespeare, was first performed on a London stage around 1594, although the actual date cannot be given for certain. The two title characters are a rich young man from the Italian city of Verona and an even younger girl from a rival family. Romeo is from the house of Montague, while Juliet is from the house of Capulet, who meet and fall instantly in love; as Romeo says, upon first seeing Juliet, ?I ne?er saw ...read more.

When claiming that a single man "must be in want of a wife", Jane Austen reveals that the reverse in also true; a single woman may be in desperate want of a husband. However, being the second daughter in the family, Lizzy is unable to marry in a ?respectable? way until her elder sister, Jane, has already done so. She is repelled by the attention of the pompous minister, Mr. Collins; by contrast, she attracted to the youthful, but dangerous, cavalry officer Mr. Wickham. Although mostly a peripheral character to begin with, Mr. Darcy is the best friend of the rich young man, Mr. Bingley, who Jane falls in love with. When their relationship fails to develop as hoped, Darcy is blamed by Lizzy for turning Bingley against her sister. Despite his reservations, which she interprets as arrogance, Darcy is attracted to Lizzy, but she cannot see him as anyone other than ?the man who has been the means of ruining, perhaps forever, the happiness of a most beloved sister.? Shocked by her refusal of his offer of marriage, Darcy ...read more.

Because of the reasons that should keep the lovers apart, but fail to do, the love between them is more intense and precious as a result. Darcy is from a different class to Lizzy, and, because of this, he would not have been expected to marry her, but he cannot deny his feelings for her. The ?proper? or socially-acceptable way of conducting a love affair has always been important, and this is present in both of the stories; however, because of the differences in time and culture, ?Pride and Prejudice? and ?Romeo and Juliet? are not identical. Juliet is expected, by her father at least, to marry Paris, and Romeo?s lover Rosaline is noticeable by her absence for the play. Similarly, Lizzy is under pressure from her mother (but not father), to marry Mr Collins, as she needs the long-term financial security of marriage, and Darcy has been intended, since his youth, as the husband of the daughter of the influential Lady Catherine de Burgh. ...read more.

Comparing two pieces of weighty literature will always be challenging; however there is no real comparison occurring in this essay which makes the title a little irrelevant. If comparing texts very specific comparisons have to be made considering both the similarities and differences in the texts.