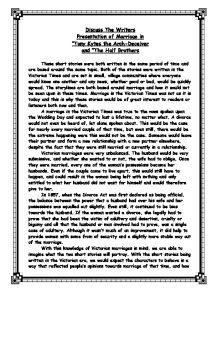 Discuss The Writers Presentation of Marriage in "Tony Kytes the Arch-Deceiver and "The Half Brothers These short stories were both written in the same period of time and are based around the same topic. Both of the stories were written in the Victorian Times and are set in small, village communities where everyone would know one another and any news, whether good or bad, would be quickly spread. The storylines are both based around marriage and how it would not be seen upon in these times. Marriage in the Victorian Times was not as it is today and this is why these stories would be of great interest to readers or listeners both now and then. A marriage in the Victorian Times was true to the vows spoken upon the Wedding Day and expected to last a lifetime, no matter what. A divorce would not even be heard of, let alone spoken about. This would be the case for nearly every married couple of that time, but even still, there would be the extreme happening were this would not be the case. Someone would leave their partner and form a new relationship with a new partner elsewhere, despite the fact that they were still married or currently in a relationship. Victorian marriages were very unbalanced. The husband would be very submissive, and whether she wanted to or not, the wife had to oblige. Once they were married, every one of the woman's possessions became her husbands. Even if the couple came to live apart, this would still have to happen, and could result in the woman being left with nothing and only entitled to what her husband did not want for himself and would therefore give to her. In 1857, when the Divorce Act was first declared as being official, the balance between the power that a husband had over his wife and her possessions was equalled out slightly. ...read more.

If he had not asked her, Milly would probably have behaved in a way that would have been expected of her, and rather than ask for a ride, have walked home. "To ride back with me, did you say, dear Milly." She has also behaved in the way that a wife would towards her husband by walking to meet Tony on his way home from work, as he had asked her to. With all the confusion of having Unity hiding out of sight, Tony had forgotten this. "I've come to meet you as you asked me to, and to ride back with you," When Tony meets with his father and asks him whom he should marry, his father tells him to marry Milly. This is because Milly did not ask for a ride home and was invited by Tony. As the other girls asked for a ride home and did not behave in a manner expected by society his father does not want him to marry them. Milly has behaved respectably and in a way expected by society of that time. Even though Tony is already engaged to Milly, if she had asked for a ride home, his father would have advised him to do otherwise. "Whichever of 'em did not ask to ride with thee." "That was Milly, I'm bound to say, as she only mounted by my invitation." Milly is thought to be the better of the three by Tony's father and probably the rest of society would have agreed all because she did not invite herself into Tony's wagon. Regardless of how else she has behaved or whatever she might do, this is thought to be one of the most respectable ways in which a Victorian woman could behave. "stick to Milly, she's the best..." At the end of the story, Milly watches Tony propose to two other women when he has already asked her and they are meant to be getting married. ...read more.

These attitudes are quite different to the reasons why people get married today. Today, people will be married three or sometimes even four times and still think nothing of it. They have children to different men and don't understand that this is not the correct way to behave. They will sometimes get married to someone just because of money or if they see it as a way of leaving home. Some people get married exceptionally young and therefore do not really understand what they are getting themselves into. Other people enter the marriage with the full intention of having a loving, successful relationship, but it may go wrong. One of the couple may have an affair or just decide to leave the woman and they end up getting a divorce. Today, the majority of couples will get divorced. Unlike in the Victorian times were you stayed with one partner for eternity, people today will often have more than one. In my opinion, these changes in the attitudes towards marriage have come about because of the changes in society on a whole. As the years have gone by, society and the way that people live have become much more relaxed and easy. People do not always have to work as hard for the money because of benefits and the council who can provide houses for people to live. In the Victorian times, money had to be worked for and unless you had a job, you had no money. Where people will sometimes just slip away and get married alone at a registry office, or not tell anybody, in the Victorian times, it was a public occasion and before you got married, a notice would be put up in the church telling everyone who was to become man and wife. I feel that if society on a whole became a lot stricter and everything as formal as it was in the Victorian times, then people's attitudes and outlook on marriage would change with it. In another hundred years or so, it will have all changed again. ...read more.