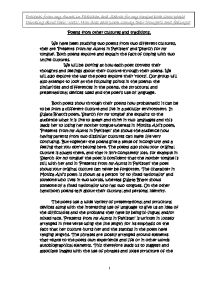 Presents from my Aunts in Pakistan and Search for my tongue both show people thinking about their 'roots'. How does each poem convey their thoughts and feelings?

Poems from other cultures and traditions. We have been studying two poems from two different cultures, they are 'Presents from my Aunts in Pakistan' and 'Search for my tongue'. Both poems explore and explain the fact of coping with two unlike cultures. We will be looking at how each poet conveys their thoughts and feelings about their culture through their poems. We will also explore the way the poets explore their 'roots'. Our group will also attempt to look at the following points in the poems: the similarities and differences in the poems, the structural and presentational devices used and the poet's use of language. Both poets show through their poems how problematic it can be to be from a different culture and live in a peculiar environment. In Sujata Bhatt's poem, 'Search for my tongue' she explains to the audience what it is like to speak and think in two languages and this leads her to losing her mother tongue whereas in Moniza Alvi's poem, 'Presents from my Aunts in Pakistan' she shows the audience how having parents from two dissimilar cultures can make life very confusing. ...read more.

In contrast Sujata Bhatt has structured 'Search for my tongue' into three sections which all show different ideas and images. The first section is up to line 16 where she talks about how hard it is for her to know two languages and neglect the one she feels that most belongs to her. The second section is from line 17 to 30 where she explains her ideas in her mother tongue which comes back to her in a dream, and the last section is from line 31 onwards where she translates her thoughts into English, where she shows her mother tongue dying during the day and coming back in her dreams. She also uses an extended metaphor of the tongue being a plant where she says in lines 31 to 35, 'It grows back, a stump of a shoot grows longer, grows moist, grows strong veins, it ties the other tongue in knots, the bud opens, the bud opens in my mouth, it pushes the other tongue aside.' ...read more.

The other poem 'Search for my tongue' also uses images to convey its point about the fact of having to speak two languages for example the extended metaphor can also be considered as an image showing the mother tongue growing stronger. But this poem also uses other language devices to help forward her point about her culture for instance she uses enjambment in her poem which means not that lines of poetry are not stopped at the end. This also builds up an atmosphere of anticipation and eagerness to know the outcome, like the use of 'grow' three times in a line. Sujata Bhatt writes in first person and this can be seen when she starts the poem, where the speaker addresses 'you'. This demonstrates that there is a conversation going on, as 'you' have just asked a question to the poet. Where as 'Presents from my Aunts in Pakistan' is written in first person, this can be seen when she starts her poem with 'I' and also uses 'My'. She is writing her own personal account of her experiences. 1 ...read more.