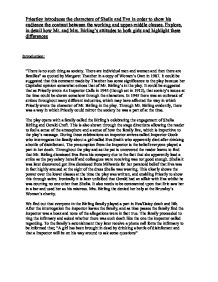 Priestley introduces the characters of Sheila and Eva in order to show his audience the contrast between the working and upper-middle classes. Explore, in detail how Mr. and Mrs. Birling's attitudes to both girls and highlight there differences

Priestley introduces the characters of Sheila and Eva in order to show his audience the contrast between the working and upper-middle classes. Explore, in detail how Mr. and Mrs. Birling's attitudes to both girls and highlight there differences Introduction: "There is no such thing as society. There are individual men and women and then there are families" as quoted by Margaret Thatcher in a copy of Women's Own in 1987. It could be suggested that this comment made by Thatcher has some significance to the play because her Capitalist opinion somewhat echoes that of Mr. Birling's in the play. It could be suggested that as Priestly wrote An Inspector Calls in 1945 (though set in 1912), that society's issues at the time could be shown somehow through the characters. In 1945 there was an outbreak of strikes throughout many different industries, which may have affected the way in which Priestly wrote the character of Mr. Birling in the play. Through Mr. Birling evidently, there was a way in which Priestly could mirror the society he was a part of at the time. The play opens with a family called the Birling's celebrating the engagement of Shelia Birling and Gerald Croft. This is also shown through the stage directions allowing the reader to feel a sense of the atmosphere and a sense of how the family live, which is imperitive to the play's message. During these celebrations an inspector arrives called Inspector Goole who interrogates the family about a girl called Eva Smith who apparently died after drinking a bottle of disinfectant. ...read more.

because he is always trying to make himself sound just as important as they are in a way he is scared of them Wages in 1912: Working class: In 1912 the average wage for the working class was the budget of �1.12 a week which was mainly spent on necessities such as food, electricity; rent ect... which left little money for the luxuries due to the main person that brings in the money need to have a lot of food due to loads of shifts. Middle to upper class: The average wage for the middle to upper class person was �5.75 a week. Which was able to buy rent for a big house, hire of a nanny and a butler, food ect... After spending on the necessities there were quite a lot of money for luxuries. Author's intensions: When Priestley wrote "An Inspector Calls" in 1945 but set it in 1912. I feel Priestley did this because he believed that in 1945 there was a time for a change and Priestley want to make people realize how before the war there was a very strong barrier between the social classes, and how affective it was when people came together in the war effort. As Priestley was a socialist he therefore wanted there to be break down the classes, he links this in to the play to show the supposed arrogance from higher class people towards the lower class as the lower class need the higher class to live a decent life and vice versa. ...read more.

They were then discussing the thing that went on that evening and her parents were only thinking about themselves that the whole interrogation was a hoax but Shelia, Gerald and Eric were ashamed of Mr. And Mrs. Birling and believed that even though the whole ordeal was a hoax, they shouldn't treat people that poorly, no matter what class Eva Smith/Daisy Renton: From what we find out in the play is that Eva/Daisy would stand up for her self no matter what because when she worked for Mr. Birling's company she was asking for a little pay rise but Mr. Birling wouldn't allow her to have one and dismissed her from the works, but this shows that Eva/Daisy knew the difference between right and wrong Eva/Daisy in the eyes of Mr. and Mrs. Birling "They'd be soon asking for the earth" Mr. Birling believes that the lower class would be like leeches (always wanting more) so Mr. Birling dismissed her, his attitudes to the other workers is very poor standard "minimum pay, doesn't care about there safety" Mrs. Birling thinks the same as Mr. Birling about Eva/Daisy, Mrs. Birling is the chairwoman of the Brumley's Women's Charity, and the actions that Mrs. Birling taken against here was very uncharitable like and very prejudice. I believe that Mrs. Birling refused to give Shelia help was because she was of the lower class and the fact she used Mrs. Birling as her name. Mrs. Birling believed that Shelia was "just another person" and not a part of society due to her social standing. ...read more.