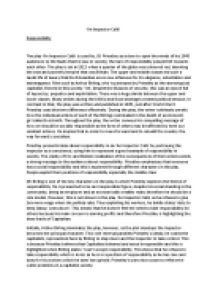 Priestley presents ideas about responsibility in an 'An Inspector Calls'

﻿?An Inspector Calls? Responsibility The play 'An Inspector Calls' is used by J.B. Priestley as a door to open the minds of his 1945 audiences to the faults that he saw in society; the lack of responsibility people felt towards each other. The play is set in 1912 when a quarter of the globe was coloured red, denoting the vast and powerful empire that was Britain. The upper and middle classes led such a lavish life of luxury that the Edwardian era is now infamous for its elegance, ostentation and extravagance. Men such as Arthur Birling, who is portrayed by Priestley as the stereotypical capitalist, thrived in this society. Yet, despite the illusions of security, this was an epoch full of hypocrisy, prejudice and exploitation. There was a huge divide between the upper and lower classes. Many strikes during the 1900s and food shortages created political tension. In contrast to that, the play was written and published in 1945, just after World War II. Priestley uses this time difference effectively. During the play, the writer ruthlessly unveils how the individual actions of each of the Birlings culminated in the death of an innocent girl called Eva Smith. Throughout the play, the writer conveys his compelling message of how we should be socially responsible as the lives of others may be affected by even our smallest actions. ...read more.

B. Priestley’s message in the play. Set in 1910, the author attempts to show how Capitalism without a conscience led to the world wars, revolutions and economic catastrophes that had occurred by 1945 when the play was written. Our first impressions of the character of Sheila Birling are presented in the stage directions at the beginning of the play; very pretty girl in her early twenties, very pleased with life and rather excited. She is the daughter of a prosperous industrialist and her life has been one of ease and pleasure with little concern for the world outside her immediate social circle. In addition she is engaged to be married to Gerald Croft which means a step up the social ladder as he is the son of Lord and Lady Croft. Nevertheless, we learn quickly that she is not naïve as she may at first appear. When Gerald reminds her he has been trying to get her to marry him for some time she reveals that she suspects this is not quite true; ‘last summer, when you never came near me, and I wondered what happened to you.’His excuse is that he was busy at the works but her tone is described as ‘half-serious’ when she replies ‘that’s what you say’. It suggests she suspects that he may have been having an affair and is therefore worldlier than her sheltered background might suggest. ...read more.

Mrs Birling could represent wrath for being angry with Eva Smith over calling herself 'Mrs Birling'. Sheila could be envy for being jealous of Eva in Milwards, and Gerald could be lust for having an affair with Eva. The fact that they can be identified as sins shows how Priestley emphasises the immorality of capitalism and the Birlings initial attitudes to responsibilities. The aim of this play was to make us question our own characters and beliefs. Priestley structured his social criticism very well. This was put across to the audience in an extraordinary way. Priestley wanted the audience to learn from the mistakes of the Birlings. It would have changed people?s views on society. Priestley uses the class divide between the Birlings and Eva Smith, to show that the rigidity of the class system is incompatible with his views on community and responsibility. The fact that a meaningful message is represented would indicate that ?An Inspector Calls?, not only a murder mystery but a play about morality shows the audience how not to live their lives, using characters to demonstrate this. The play is very effective because it has a strong meaning as it is still relevant in today?s society. As wealth and power have become increasingly more important, socialists feeling of responsibility for one another have been progressively weakened. However I feel that we as a society might be able to learn from some of Priestley?s teachings and work together to form a more equal society for our future generation. ...read more.