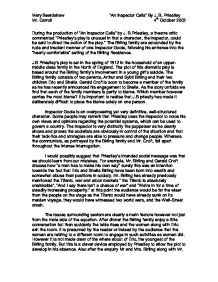 &quot;Priestley's play is unusual in that a character, the inspector, could be said to direct the action of the play.&quot; Discuss

During the production of "An Inspector Calls" by J. B Priestley, a theatre critic commented "Priestley's play is unusual in that a character, the inspector, could be said to direct the action of the play." The Birling family are astounded by the rude and insolent manner of one Inspector Goole, following his entrance into the "hearty comfortable" setting of the Birling Residence. J.B Priestley's play is set in the spring of 1912 in the household of an upper-middle class family in the North of England. The plot of this dramatic play is based around the Birling family's involvement in a young girl's suicide. The Birling family consists of two parents, Arthur and Sybil Birling and their two children Eric and Sheila. Gerald Croft is soon to become a member of the family as he has recently announced his engagement to Sheila. As the story unfolds we find that each of the family members is partly to blame. Which member however carries the most blame? It is important to realise that J.B priestly has made it deliberately difficult to place the blame solely on one person. Inspector Goole is an overpowering yet very definitive, well-structured character. Some people may remark that Priestley uses the inspector to voice his own views and opinions regarding the potential systems, which can be used to govern a country. The inspector is very distinctly the puppeteer as he clearly shows and proves the socialists are obviously in control of the situation and that their tack-tics and strategies are able to pressure and change people. Whereas the communists, as portrayed by the Birling family and Mr. Croft, fall apart throughout the intense interrogation. I would possibly suggest that Priestley's intended social message was that we should learn from our mistakes. For example, Mr. Birling and Gerald Croft discuss how "a man has to make his own way" surely this was an intention towards the fact that Eric and Sheila Birling have been born into wealth and somewhat abuse their positions in society. ...read more.

After the inspector has left the house, Mr. Birling makes Gerald responsible that he cannot get a knighthood now. Also Mrs. Birling looks at all these things from the social point of view. This prophetic speech allows the audience to fully appreciate Priestley's perspective on life and enables the Inspector to conclude his opinions through a threatening yet subtle way. The inspector's abnormality is once again aroused when the phone call relating to a girl's death at the infirmary occurs. The inspector's line of enquiry is unusual as he only shows the photograph "to one person at a time"; this could cast a shadow as to the authenticity of Goole as people subconsciously will analyse this and question whether the photograph was actually the same one or whether it was a series of different photographs. In my opinion, Priestley was trying to articulate that it didn't matter who was in the photo because they all admitted to harming at least one person's life throughout the last two years. I assume that the Birling family also questions this upon the arrival of Gerald who confirms that the inspector was a fake. The inspector uses emotive language such as "great agony" and "she had been very pretty". This is because Priestley wants to purvey just how much pain, mentally or physically, you can put a person through by just one small encounter with them in your life. The inspector is very authoritative and seems to know a lot about the young girl's life and yet the family do not think to question him. His questions are well thought out, almost as if he had repeated them several times over and this was the impact on which the family acted. The inspector has the power to cut down to the bone, kill the nerves, unsteady and chill the other characters. He also shows his authority through his ability to interrupt and shorten Mr. ...read more.

They were able to think and open their thoughts to the feelings and actions of Eva Smith. The definite line drawn between the family leaves Gerald stuck in the middle and somewhat questioned as to where his priorities lie. For example, does he side with his love and future wife or does he side with his future in-laws for the sake of the business arrangement? Instead of making the difficult decision he stands his own ground and agrees with the inspector on some counts but agrees with the capitalist couple in other cases. The theatre critic was correct in stating that the inspector controls the action in the play. This is because he acts as the puppeteer who directs and rehearses his act until he has the perfect interrogating and intimidating effect. The inspector is the role model for the audience as he respects the views of the family but corrects and points out their faults and times at which they have faltered. People say that it is impossible to change a person's beliefs or actions to suit themselves. The inspector does not prove that he has the power to change people but simply allows the characters and the audience to reflect and change themselves. Therefore, to conclude, I agree that the theatre critic was correct and that the inspector does direct the action of the play to give a sense of authority and order during the investigation. However, I believe that if even a minor detail of the inspector's character was altered in any way shape or form, the dramatisation of the harsh and hard hearted way in which the inspector voices his opinions and forces himself upon the characters' minds, that the message would not be brought across in as successful manner. I think that Priestley was certain about the way in which the play was conducted and that is why he went into such detail about the mood and atmospheric changes throughout the play. Mary Beardshaw "An Inspector Calls" By J. B. Priestley Mr. Carroll 4th October 2002 ...read more.