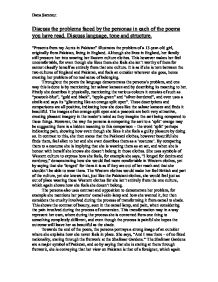 Problems faced by the personas in the poems

Discuss the problems faced by the personas in each of the poems you have read. Discuss language, tone and structure. "Presents from my Aunts in Pakistan" illustrates the problem of a 13-year-old girl, originally from Pakistan, living in England. Although she lives in England, her family still pressure her into wearing her Eastern culture clothes. This however makes her feel uncomfortable, for even though she likes them she feels she isn't worthy of them for cannot classify herself as entirely from that one culture. It is as if she is torn between the two cultures of England and Pakistan, and feels an outsider wherever she goes, hence creating her problem of no real sense of belonging. Throughout the poem the language demonstrates the persona's problem, and one way this is done is by mentioning her salwar kameez and by describing its meaning to her. Firstly she describes it physically, mentioning the various colours it consists of such as "peacock-blue", "gold and black", "apple-green" and "silver-bordered", and even uses a simile and says its "glistening like an orange split open". These descriptions and comparisons are all positive, indicating how she does like the salwar kameez and finds it beautiful. The images of an orange split open and a peacock are both very attractive, creating pleasant imagery in the reader's mind as they imagine the sari being compared to these things. ...read more.

This over time makes her feel that her new 'tongue', or language, is taking over her mother tongue which perhaps was a link to who she is. The fact that she is losing this makes her feel a different person to who she was when she only spoke her one native language, Gujarati, hence how she feels she has lost her identity. Throughout the poem the persona uses the metaphor of a tongue representing language, and creates the image of two tongues in her mouth, fighting to such an extent that her mother tongue is eventually killed and must be 'spat out'. This descriptive metaphor conveys how she feels the two languages are incapable of being used together, and, against her will and out of her control, her second language eventually overpowers her native language until it becomes out of her reach. The language used demonstrates her problem; an example of this is where she uses the metaphor of the flower in the final stanza. Through this metaphor she explains how whilst she dreams her mother tongue thrives and grows ever stronger in her mouth, and illustrates this process through the image of a flower in its early stages of life. She says, "It grows back, a stump of a shoot / grows longer, grows moist, grows strong veins," showing how she sees her mother tongue as a growing plant, an attractive image, suggesting she sees Gujarati as beautiful and thriving. ...read more.