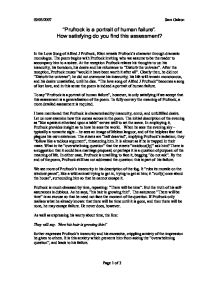 &quot;Prufrock is a portrait of human failure&quot;. How satisfying do you find this assessment?

"Prufrock is a portrait of human failure". How satisfying do you find this assessment? In the Love Song of Alfred J Prufrock, Eliot reveals Prufrock's character through dramatic monologue. The poem begins with Prufrock inviting who we assume to be the reader to accompany him to a soiree. At the reception Prufrock relates his thoughts to us: his insecurity, his boredom, his desire and his reluctance to "Disturb the universe". After the reception, Prufrock muses "would it have been worth it after all". Clearly then, he did not "Disturb the universe"; he did not overcome his insecurity; his life will remain monotonous, and his desire unsatisfied, until he dies. "The love song of Alfred J Prufrock" becomes a song of lost love, and in this sense the poem is indeed a portrait of human failure. To say "Prufrock is a portrait of human failure", however, is only satisfying if we accept that this assessment is a generalisation of the poem. To fully convey the meaning of Prufrock, a more detailed assessment is required. ...read more.

He never does, however. As well as expressing his worry about time, the line: They will say: 'How his hair is growing thin!' further expresses Prufrock's insecurity and his excessive, crippling anxiety of the impression he gives to others. It is this anxiety which prevents him from asking the "overwhelming question", and leads to his failure. Prufrock is a man who does not "dare". If Prufrock could "dare" to speak his mind, or risk asking the question, he would be a much happier man. Even his clothes are self-consciously fashionable, without making a statement: his necktie "rich and modest" (i.e. neither in the extreme), is "asserted by a simple pin", and his collar is mounted "firmly to the chin", as if for protection. More than anything, Prufrock fears that if dares to he "force[s] the moment to its crisis", he will have been incorrect to do so, and a woman "settling a pillow or throwing off a shawl" will say: 'That is not it at all, That is not what I meant at all.' ...read more.