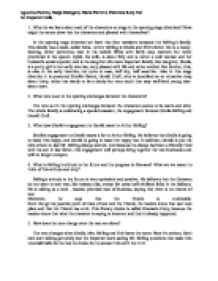 1. What do we learn about each of the characters on stage in the opening stage directions? How might the actors show that the characters and pleased with themselves? In the opening stage direction we learn that four members compose the Birling's family. This family has a maid, called Edna. Arthur Birling is Sheila and Eric's father. He is a heavy-looking, rather portentous man in his middle fifties with fairly easy manners but rather provincial in his speech. Sybil, his wife, is about fifty and is rather a cold woman and her husband's social superior; and is the daughter of a more important family. Her daughter, Sheila, is a pretty girl in her early twenties, very pleased with life and rather excited. Her brother, Eric, is also in his early twenties, not quite at ease, half shy, half assertive. Also in this stage direction it is presented Sheila's fianc�, Gerald Croft, who is described as an attractive chap about thirty, rather too manly to be a dandy but very much that easy well-bred young man-about-town. 2. What tone is set in the opening exchanges between the characters? ...read more.

If he wasn't like that, he would probably had felt afflicted, or give some type of importance, the moment when he received the news that a woman who used to work in his factory had committed suicide. If he were not so close-minded and cold, he would have felt and shown some kind of inquire or interest with the news and picture. He was sure that his decision of firing her was not relevant to Eva Smith's suicide, so he didn't understand why the inspector was there interrogating him. 12 Why does Birling start to 'move restlessly'? We can notice that Mr. Birling starts moving restlessly when the Inspector appears in his house and announces Eva Smith's suicide. Taking into account, that he knew her because she was his employee and consequent Mr. Birling gets anxious and as a reaction he starts moving restlessly. 16. What is the mood in the room when Sheila enters? The mood is tense and anxious because Mr. Birling had admitted that he knew Eva Smith and that he actually fired her from his company, but still shows no apprehension for her death. ...read more.

She realized that his future husband knew this girl. The young woman starts to suspect if Gerald was with Eva Smith the summer that he was absent. That summer, Gerald disappear and told Sheila that he was to busy with work. But his future wife wasn't sure about it. So, when she stares at Gerald, is because she knows that something has happen between his fianc� and this woman who has recently died. 27. What is the mood in the dining room as the Inspector re-enters? Before the Inspector re-appears in the dining room, Sheila and Gerald had had a private conversation. Sheila realized that his future husband knew Eva Smith and that he was with her that summer he was absent. However, Gerald asks Sheila not to tell the Inspector about it. The moment the Inspector re-enters the mood is tense. He stares at both of them. Gerald is crushed because his girlfriend knows all the truth and at the same time, because he doesn't know how much does the Inspector knows about what happened between him and Eva Smith or Daisy Renton. So, he is afraid about what can happen with him if the Inspector knows more than what he should. ?? ?? ?? ?? Agustina Paterno, Nadja Maingard, Maria Pierretti, Florencia Keip Val An Inspector Calls ...read more.

A good response in which all the points made are correct and demonstrate an understanding of the play. There is a need for further exploration in order to develop the responses further. The points made would also benefit from quotations in support.