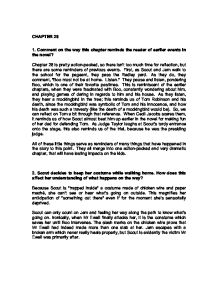 CHAPTER 28 1. Comment on the way this chapter reminds the reader of earlier events in the novel? Chapter 28 is pretty action-packed, so there isn't too much time for reflection, but there are some reminders of previous events. First, as Scout and Jem walk to the school for the pageant, they pass the Radley yard. As they do, they comment, "Boo must not be at home. Listen." They pause and listen, pondering Boo, which is one of their favorite pastimes. This is reminiscent of the earlier chapters, when they were fascinated with Boo, constantly wondering about him, and playing games of daring in regards to him and his house. As they listen, they hear a mockingbird in the tree; this reminds us of Tom Robinson and his death, since the mockingbird was symbolic of Tom and his innocence, and how his death was such a travesty (like the death of a mockingbird would be). So, we can reflect on Tom a bit through that reference. When Cecil Jacobs scares them, it reminds us of how Scout almost beat him up earlier in the novel for making fun of her dad for defending Tom. As Judge Taylor laughs at Scout's tardy entrance onto the stage, this also reminds us of the trial, because he was the presiding judge. All of these little things serve as reminders of many things that have happened in the story to this point. ...read more.

Tate his name. As she looked at him she noticed the paleness of his hands and face. He looked delicate and his eyes were so colorless he almost looked blind. His cheeks were thin and his face looked hollow, and when she pointed to him he seemed to tense up. She stared at him a moment in wonder and he smiled timidly as her eyes filled and she greeted him with, "'Hey, Boo.'" Chapter 29, Pg. 273 CHAPTER 30 1. Who does Atticus think caused Bob Ewell's death? Atticus thinks that Jem killed Bob Ewell in the course of the struggle. He stops to consider for a moment how old Jem is since this might make a difference in the course of a legal investigation. This shows that Atticus would not expect any special privileges for his family, and that he would want Jem to be subjected to the same investigation that anyone else would go through. It's Sherriff Tate who realizes that Boo Radley has actually killed Ewell to save Jem and Scout. But Ewell does not want Boo subjected to the limelight, knowing how painful this would be for Boo. His official decree is that Bob Ewell has fallen on his own knife. 2.Who does Atticus think caused Bob Ewell's death? Why does Heck Tate insist that Bob Ewell's death was self-inflicted? ...read more.

However, he reacted emotionally to Jem's scream, and did what needed to be done. And we come to discover that he is a just a man-a bit pale, but a man nonetheless-who acted as any other decent man would have to rescue Jem and Scout from the clutches of Bob Ewell. We also discover how fond he is of the children; his actions in saving them, then his desire to see Jem at the end, indicate, as all other events did, that he was fond of the children. A close reading of the novel supports that notion. 3. At the end of the novel, Atticus reads to Scout. Comment on his choice of story. Does it have any connection with themes earlier in the novel and in it's ending? The author, Harper Lee, has wisely selected The Grey Ghost as the story which Atticus reads to Scout at the conclusion of To Kill a Mockingbird. The title is ironic since the hero of the novel is similar to the ghostly pale Boo Radley. The plot of the novel is likewise akin to the children's earlier beliefs about Boo. The character, Stoner's Boy, was thought to have been a mischievous sort who was falsely accused and chased about--just like Boo. Stoner's Boy also turned out to be innocent of his crimes, and "real nice, too"--also like Boo. Atticus responds by telling Scout, "Most people are, Scout. When you finally see them." ...read more.