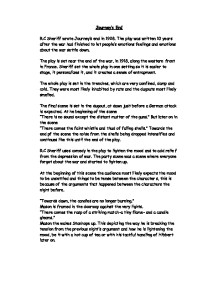 Journey's End R.C Sheriff wrote Journey's end in 1928. The play was written 10 years after the war had finished to let people's emotions feelings and emotions about the war settle down. The play is set near the end of the war, in 1918, along the western front in France. Sheriff set the whole play in one setting so it is easier to stage, it personalizes it, and it creates a sense of entrapment. The whole play is set in the trenches, which are very confined, damp and cold. They were most likely inhabited by rats and the dugouts most likely smelled. The final scene is set in the dugout, at dawn just before a German attack is expected. At he beginning of the scene "There is no sound except the distant mutter of the guns." But later on in the scene "There comes the faint whistle and thud of falling shells." Towards the end pf the scene the noise from the shells being dropped intensifies and continues like this until the end of the play. R.C Sheriff uses comedy in the play to lighten the mood and to add relief from the depression of war. The party scene was a scene where everyone forgot about the war and started to lighten up. At the beginning of this scene the audience most likely expects the mood to be unsettled and things to be tense between the characters, this is because of the arguments that happened between the characters the night before. ...read more.

When the Sergeant Major informs Stanhope that it is Raleigh who has been injured, Stanhope is shocked and requests that he be bought into the dugout. The Sergeant Major fights off this action by questioning Stanhope in disbelief, but Stanhope makes it an order, so the Sergeant agrees. On hearing the news about Raleigh, the audience feel sorry for him because in the previous scene Raleigh thought the raid was all "Frightfully exciting." This just illuminate show na�ve and innocent he is to the audience. In the final part of the scene, we see how the relationship between Stanhope and Raleigh is more than just professional. As Stanhope hears of men getting wounded, he acts calmly and plans the best course of action to help them, but when he hears of Raleigh's injury, he is affected by his friendship with Raleigh, and orders him to be bought down to the dugout. The stage directions in Act 3 Scene 3 intensify towards the end because there is more going on in this scene than in the previous scenes. When the words "stretcher bearers" are shouted from the trenches, the Sergeant Major leaves the dugout, leaving Stanhope alone. Here Stanhope shows signs of anticipation because he starts to prepare to go up in the trenches, as he waits for Sergeant Major to return. ...read more.

Then there is Stanhope, he is the hero of the company, but he is scared underneath. The structure of 'Journey's End' is to have many conversations between the different characters, before and after each progression of the plot, such as an attack. The effect of this is to build suspense and expectancy before action and emphasise the repercussion of battle after the event, it also shows to the audience that most of the time would be spent waiting for something to happen, and then when it did it would be over fairly quickly. The audience being an extension of the stage means that they get to experience the waiting and suspense, more than if they were separate to the stage. The plot in 'Journey's End' is to show the depressing inevitably and intense waiting of trench life. The audience know that the big attack is coming and it is most likely that most of the characters are going to die. However, this inevitability is not a bad thing because it builds a sense of expectancy, therefore adding suspense- the audience will be waiting for the inevitable things to happen, just like the soldiers in World War I were. 'Journey's End' portrays to the audience how the soldiers would know that they could die any day, whether it was from a sniper, or in an attack. Everyday would be the same with the main emotional factor being boredom due to the intense waiting. ...read more.