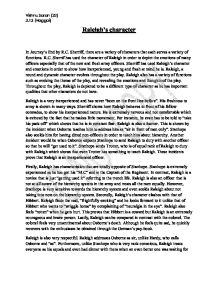 R.C. Sherrif has used the character of Raleigh in order to depict the emotions of many officers especially that of the new and fresh army officers.

Raleigh's character In Journey's End by R.C. Sherriff, there are a variety of characters that each serves a variety of functions. R.C. Sherrif has used the character of Raleigh in order to depict the emotions of many officers especially that of the new and fresh army officers. Sherriff has used Raleigh's character and emotions in order to show how inexperienced, young and fresh at mind he is. Raleigh, a round and dynamic character evolves throughout the play. Raleigh also has a variety of functions such as evoking the theme of the play, and revealing the emotions and thoughts of the play. Throughout the play, Raleigh is depicted to be a different type of character as he has important qualities that other characters do not have. Raleigh is a very inexperienced and has never "been on the front line before". His freshness to army is shown in many ways. ...read more.

Raleigh also feels "rotten" when he gets hurt. This proves that Hibbert is a coward but Raleigh is an extremely courageous and brave person. Lastly, Raleigh can be compared in contrast with the colonel. The colonel feels very unsentimental about Osborne's death. Although he feels quite sad, he quickly recovers with the enthusiasm he obtained through the German's pay-book. Raleigh is also very respectful. Raleigh addresses Osborne as sir, unlike Hardy, who calls Osborne and "as". Furthermore, unlike Stanhope who is very rank conscious, Raleigh treats everyone as his equals and even had dinner with them when an even better one was waiting for him in the trench. Despite the anger and anguish that Stanhope unleashed on Raleigh, he still carries out the duties that Stanhope asked him to do, a sign of respect and obedience. This shows that Raleigh is a very respectful person. Raleigh is a symbol of courage and bravery in Journey's End. ...read more.

He also found out that many Germans are actually unwilling to fight, which he noticed when the Germans allow the shot soldiers to be carried out of the no man's land, though which Raleigh also witnesses the foolishness of war. Raleigh has therefore changed from a novice to an extremely experienced soldier, proving himself to be a dynamic character. R.C. Sherriff has utilized Raleigh to show a variety of contrasts between characters. He also used Raleigh to portray the reality of war, about the frightful quietness of war. He also utilized Raleigh to show how a new officer to a war feels upon joining the army and how they evolve from a novice and inexperienced soldier to an experienced and matured soldier. Therefore, Raleigh is proven to be a "round" and "dynamic" character as well as a supporting character that moves the plot forward. He is also used as a benchmark of comparison between himself and other characters. Therefore, the character of Raleigh is vital to the play. ...read more.