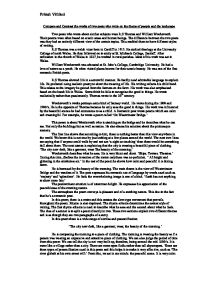 R.S Thomas and William Wordsworth. Compare and Contrast the works of two poets who write on the theme of people and the landscape.

Compare and Contrast the works of two poets who write on the theme of people and the landscape Two poets who wrote about similar subjects were R.S Thomas and William Wordsworth. Their poems were often based on scenic areas and human beings. The difference between the two poets was they had an entirely different view of the certain topics. This enabled them to have different styles of writing. R.S Thomas was a welsh vicar born in Cardiff in 1913. He studied theology at the University College of north Wales. He then followed on to study at St. Michaels College, llandaff. After ordination in the church of Wales in 1827, he worked in rural parishes. Most of his work was set in Wales. William Wordsworth was educated at St. John's College, Cambridge University. He had a love of nature as a youth. He often visited places known for their scenic beauty. He was one of the first romantic British poets. R.S Thomas showed life in a sorrowful manner. He hardly used admirable language to explain life. He preferred using realistic poetry to show the meaning of life. His writing reflects his child hood. This relates to the imagery he gained from the farmers on the farm. His work was also emphasised based on the harsh life in Wales. Some think he fails to recognise the good in things. He wrote realistically rather than passionately. Thomas wrote in the 20th century. Wordsworth's works portrays some kind of fantasy world. He wrote during the 1800 and 1900's. He is the opposite of Thomas because he only sees the good in things. ...read more.

In the first part, he says how beautiful the scene is and then just like that, he metaphorically takes it away. He reminds us of the cold which is to come. The predominant emotion in this poem is very sentimental like in the fact that he shows us of his feeling towards people's attitude to the day and he likes to admire the old things. There is also a hint of sorrow. He does not want autumn to end as we will be overcome with cold. He wants to relish it while it lasts. The atmosphere conveyed is full of bitterness and yearning of what is to come. And the point that people will regret it when it's gone. That's why he says stop and take a look at this image of the scene. Unlike Wordsworth, R. S Thomas uses a metre. He does this to slow down the tempo of the poem. Each line in most cases consists of only one word with two syllables. Even though in some cases, this is different. This adds great style to the poem. Again, unlike Wordsworth, Thomas does not have a wide range of diction as it only includes one metaphor. 'mind take its photograph' The mind is doing something which humans do. It is taking a picture as if it has a camera installed in its mind. After discussing the views of the two poets on landscape, I will now see their views on people. I have chosen to express a poem called 'The Solitary Reaper' by William Wordsworth. The poem is about a woman who is all alone and is reaping and binding the harvest. ...read more.

You wonder what your plans are. But you also feel a sense of security as you know that you will have a home to live in, and that you will have to go to school the next day. Unluckily for the tramp, he does not. From the two poems 'On Westminster Bridge' and 'A Day in Autumn' we can see the two different views on the subject. Wordsworth exaggerates the idea. When it is not very glamorous, he makes it sound outstanding. Thomas just likes his poems to be more realistic. The two use the same style on their poems based on people as well. Wordsworth's poems tend to be long with some sort of rhyme and rhythm. When thinking of the different topics, Thomas tends to talk about the more harsh things in life rather than Wordsworth's life with no problems as this can be seen in Wordsworth's poem 'The solitary Reaper'. She is a labourer in a field and this work in reality is very hard, back-breaking work. But Wordsworth does not see this and his romantic style, he beautifies the poem destroying any sense of harshness to be found. With Thomas however, it can be seen that he views the harshness and reality of life giving his poetry a more realistic touch. I prefer reading Thomas' poems because these topics actually are involved in my life. I, like many others have to see people suffer. We see tramps on the streets and to me this is a distressing thought. Wordsworth over exaggerates to this I do not agree. When he says that the view on Westminster Bridge is the best around the world, I do not agree. I have been and heard of many places which are better in my view. Pritesh Vithlani ...read more.