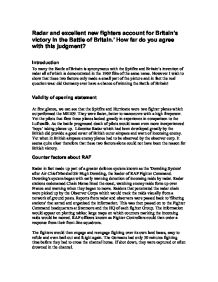 Radar and excellent new fighters account for Britain's victory in the Battle of Britain.

Radar and excellent new fighters account for Britain's victory in the Battle of Britain.' How far do you agree with this judgment? Introduction To many the Battle of Britain is synonymous with the Spitfire and Britain's invention of radar all of which is demonstrated in the 1969 film of the same name. However I wish to show that these two factors only made a small part of the picture and in fact the real question was: did Germany ever have a chance of winning the Battle of Britain! Validity of opening statement At first glance, we can see that the Spitfire and Hurricane were two fighter planes which outperformed the ME109. They were faster, better to manoeuvre with a high firepower. Yet the pilots that flew these planes lacked greatly in experience in comparison to the Luftwaffe. As the battle progressed death of pilots would mean even more inexperienced 'boys' taking planes up. ...read more.

The information would appear on plotting tables: large maps on which counters marking the incoming raids would be moved. RAF officers known as Fighter Controllers could then order a response from their front-line squadrons. The fighters would then engage and reengage fighting over its own land bases, easy to refule and even bail-out and fuight again. The Germans had only 30 minutes fighting time before they had to cross the channel home. If shot down, they were captured or often drowned in the channel. Counter factors about Luftwaffe In fact it could be argued that Germany was in an un-winnable position. Their numerical superiority was not sufficient to achieve superiority while the theories of strategic bombing, which hinged on the collapse of public morale, were undone by British defiance in the face of the day and night Blitzes. The switch to a terror bombing strategy allowed the RAF to recuperate and to defend against the attacks. ...read more.

By asking for the destruction of the RAF they were putting off the need to attack the RAF head-on. Likewise Hitler was presented with a face-saving situation when Goring promised to destroy the RAF. It is Goring who was to start to slip from power with the failure of operation Sealion. Final judgement In answer to the statement made in the question, is that radar and fight planes played a part and a significant part in the myth which was to arise from the battle. Yet in reality the Battle's victory was as much psychological as physical. It turned a tide of defeats and heartened the enemies of Nazism. Even though the threat to the RAF was very real and for the participants it seemed as if there was a "Narrow Margin" between victory and defeat the reality was that Hitler had been pushed into a war with Britain he did not want to make with a geographical probem, an island nation, which he could not sumount. ...read more.