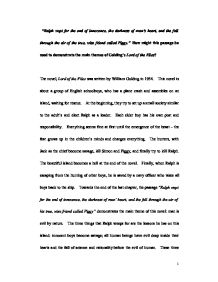 &quot;Ralph wept for the end of innocence, the darkness of man's heart, and the fall through the air of the true, wise friend called Piggy.&quot; How might this passage be used to demonstrate the main themes of Golding's Lord of the Flies?

"Ralph wept for the end of innocence, the darkness of man's heart, and the fall through the air of the true, wise friend called Piggy." How might this passage be used to demonstrate the main themes of Golding's Lord of the Flies? The novel, Lord of the Flies was written by William Golding in 1954. This novel is about a group of English schoolboys, who has a plane crash and assembles on an island, waiting for rescue. At the beginning, they try to set up a small society similar to the adult's and elect Ralph as a leader. Each elder boy has his own post and responsibility. Everything seems fine at first until the emergence of the beast - the fear grows up in the children's minds and changes everything. The hunters, with Jack as the chief become savage, kill Simon and Piggy, and finally try to kill Ralph. The beautiful island becomes a hell at the end of the novel. Finally, when Ralph is escaping from the hunting of other boys, he is saved by a navy officer who takes all boys back to the ship. Towards the end of the last chapter, the passage "Ralph wept for the end of innocence, the darkness of man' heart, and the fall through the air of his true, wise friend called Piggy" demonstrates the main theme of this novel: man is evil by nature. ...read more.

At the beginning of the novel, Golding has already suggested that human beings are evil by using the word 'scar' to mean the crashed plane. Scar is associated with ugliness and is unwanted by everyone. Golding relates the ugliness with the inventions of human beings and this association shows that human beings bring destruction and disasters to this beautiful and paradise-like island. The schoolboys become savage and evil because there are no adults on the island. In their minds, adults mean laws and orders, so without their existence, they can do whatever they want, even to hurt and kill their friends. The setting of the novel is an isolated island that is far away from civilization and wars. At first, the children are still bound by their civilization: the rules, the ideas of right and wrong and the things they were taught in their old lives are still deep inside their minds. For instance, Roger fails to aim the stones at Henry because he feels uneasy of these wrongdoings. However, later in this setting, an island, without law and adults, becomes a place that makes the children go wild., as said in the illusionary dialogue of Simon with the Lord of the flies, 'We are going to have fun on this island'. Similar to what the children have thought before, they think they will have fun because there are no adults. ...read more.

He is the representative of religion and spiritual mind. He is the only one who realizes the religious associations of the 'candle bushes' and 'candle buds' (p28). He also realizes that human beings are evil in nature. Simon is beaten to dead by the boys because they mistake him as the beast. His death gives us the idea that even the faith on religion is defeated by fear. Human beings are afraid of everything unknown and mysterious, and with fear, people become savage like the boys. When confronting the evil nature, the spirituality and religious faith in human beings lose. Without the spirituality, human beings resemble the animals that live by their own instincts. Ralph actually weeps for all human beings because he finally realizes that human is evil by nature. 'It is Ralph who is "grown-up", but he shows his adulthood by weeping.' (Kinkead-Weekes, Mark and Ian Gregor: p63). The main theme of this novel, human beings are evil by nature develops from the beginning and concludes with the epiphany of Ralph. He knows that human beings, even children are no longer innocence and rationality fails in binding human beings. Ralph is not rescued by the navy officer, but he is actually taken to the world of more terrible wars. He cannot be saved by adults because adults, too do not realize that there are 'darkness' in their hearts that cannot be conditioned or bound. ...read more.