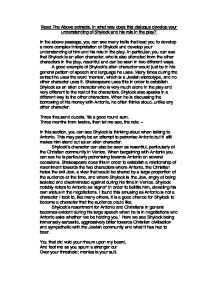 Read The Above extracts. In what way does this dialogue develop your understanding of Shylock and his role in the play?

Read The Above extracts. In what way does this dialogue develop your understanding of Shylock and his role in the play? In the above passage, you can see many traits that lead you to develop a more complex interpretation of Shylock and develop your understanding of him and his role in the play. In particular, you can see that Shylock is an alien character, who is also alienated from the other characters in the play, resentful and can be seen in two different ways. A good example of Shylock's alien character would just be in his general pattern of speech and language he uses. Many times during the extract he uses the word 'monies', which is a Jewish stereotype, and no other character uses it. Shakespeare uses this in order to establish Shylock as an alien character who is very much alone in the play and very different to the rest of the characters. Shylock also speaks in a different way to the other characters. When he is discussing the borrowing of his money with Antonio, he often thinks aloud, unlike any other character. ...read more.

He uses very bold and grotesque imagery when describing the 'void upon his rheum' and an audience at any time would find this sickening, giving you a sense of sympathy for him, but being held back by the idea he has insulted Christians and hates them. This phrase has also got onomatopoeic characteristics as when you say it aloud it almost sounds as if you are spitting. You can see Shylocks portrayal of the Jews is gentle and innocent as apposed to his portrayal of the prejudicial Christians. Still I have borne it with a patient shrug For suff'rance is the badge of all our tribe. This soft tone evoked by this language is used in order to convey the image of a peaceful Jewish community, making them seem more innocent and, when juxtaposed with Shylock's description of the Christian community, creates stark contrast. Shylock is also mono-syballic in his speech to add strength when saying how Christians are prejudicial towards him yet do it 'all for use of that which is mine own.' ...read more.

My personal opinion is that Shakespeare has created Shylock as a mixture of both these style of character. I think his character is one that should evoke sympathy and has been discriminated against unfairly and lives a life much troubled as a result. However, at the time this was written I feel Shakespeare would have wanted Shylock to have that evil edge to his personality as he too would have the primitive stereotype engrained in his value system. Perhaps that is why he was such an interesting character as Shakespeare wanted to challenge his audience to feel slightly sympathetic towards him, even though he is Jewish, and besides, no one person can be completely good, we are all evil at times, especially hard ones. Whatever opinion or portrayal is evoked by Shylock, you can learn many things about him in this passage as he throws in hints of all his characteristics and personal features. Not all of these are clear and his overall purpose in the play has never been set in stone. It is clear that he is how you read him, and how you react to this scene will probably influence that decision. ...read more.