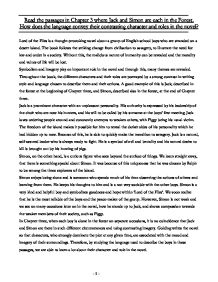 Read the passages in Chapter 3 where Jack and Simon are each in the Forest. How does the language convey their contrasting character and roles in the novel? Lord of the Flies is a thought-provoking novel about a

Read the passages in Chapter 3 where Jack and Simon are each in the Forest. How does the language convey their contrasting character and roles in the novel? Lord of the Flies is a thought-provoking novel about a group of English school boys who are stranded on a desert island. The book follows the striking change from civilisation to savagery, to illustrate the need for law and order in a society. Without this, the malicious nature of humanity can be revealed and the morality and values of life will be lost. Symbolism and imagery play an important role in the novel and through this, many themes are revealed. Throughout the book, the different characters and their roles are portrayed by a strong contrast in writing style and language chosen to describe them and their actions. A good example of this is Jack, described in the forest at the beginning of Chapter three, and Simon, described also in the forest, at the end of Chapter three. Jack is a prominent character with an unpleasant personality. His authority is expressed by his leadership of the choir who are now his hunters, and his will to be called by his surname at the boys' first meeting. Jack loves ordering people around and constantly attempts to weaken others, with Piggy being his usual victim. The freedom of the island makes it possible for him to reveal the darker sides of his personality which he had hidden up to now. Because of this, he is able to quickly make the transition to savagery. ...read more.

They are at one with Simon and nature is at one with him. The smell when Simon is in the forest is pleasant; "everywhere was the scent of ripeness". Also the scent of the candle-buds "spilled out into the air and took possession of the island." I think the pleasantness and beauty of Simon's forest symbolises peace and love and the aura of goodness which surrounds him. In both passages, a physical description of the boys is given. Although these have many similarities, the symbolism behind the slight differences is quite significant. Jack's freckles are described as being "dark", again adding to the dark imagery which seems to surround Jack in his description. His sunburn is said to be "peeling" which adds an image of redness to Jack's character. This could possibly signify rage and lack of control. Simon's sunburn is also described, but this time it is, "a deep tan that glistened with sweat." This does not have the same connotation as Jack's red sunburn. Everything about Simon seems to be attractive as even his sunburn "glistens". In the passages, both boys are wearing similar clothing. However, the slight difference between the two descriptions is very telling. Jack is said to be naked "except for a pair of tattered shorts held up by his knife-belt", whereas Simon "wore the remains of shorts". I feel that it is significant that Jack is wearing a knife belt. Knives are implements of fighting, and Jack is also described as having "a sharpened stick about five feet long". This shows that Jack is willing to fight and is prepared to kill. ...read more.

He shows himself to be the one character that has an affinity with nature and wherever Simon walks, there seems to be a certain glow and brilliance. Unlike Jack, he gives of himself without greed or desire for power and authority. He is described as almost supernatural in force and he is never afraid. Although Simon is quiet and private, a certain goodness and purity about him is revealed when he is in the forest, and he is shown for the first time to have a certain power and wisdom of his own. Everyone has the potential to display acts of an evil nature. However, we also have the ability to prevent them from being shown. I believe that together Jack and Simon's character symbolize the two extremes of human nature; goodness and evil. Both reside in every one of us, but it is up to each of us as to how we control them, and it is this, which differentiates us from our neighbour. During Simon's description, Golding often adds "like Jack" at the end of a sentence to show his eagerness for us to pick up on the symbolism and the roles which are portrayed in the two boys. It is no mistake that similar actions and descriptions are portrayed in such a way to symbolize different characteristics and roles which the two boys hold. I believe that we are encouraged to compare the two characters, so that we are able to learn from them how greatly mankind can differ. 'Lord of the Flies' is a truly magnificent and meaningful book where Golding writes every sentence, places every image and inserts every symbol with precision. ?? ?? ?? ?? - 1 - ...read more.

This is an excellent GCSE essay. It is well written and logically structured. There are some very perceptive and mature comments and when these are supported adequately by references to the text then this essay is of the highest standard. The writer shows a real understanding of the novel and is confident in moving about the novel and looking at 'the bigger picture'. There are some thoughtful comments on the nature of religious symbolism and good versus evil.
More quotes were needed at the beginning but despite this 5 Stars.