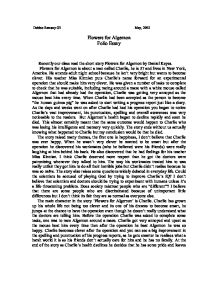 Recently our class read the short story Flowers for Algernon by Daniel Keyes.

Debbie Ramsay G3 May, 2002 Flowers for Algernon Folio Essay Recently our class read the short story Flowers for Algernon by Daniel Keyes. Flowers for Algernon is about a man called Charlie, he is 37 and lives in New York, America. He attends adult night school because he isn't very bright but wants to become clever. His teacher Miss Kinnian puts Charlie's name forward for an experimental operation that should make him very clever. He was given a number of tasks to complete to check that he was suitable, including racing around a maze with a white mouse called Algernon that had already had the operation, Charlie was getting very annoyed as the mouse beat him every time. When Charlie had been accepted as the person to become "the human guinea pig" he was asked to start writing a progress report just like a diary. As the days and weeks went on after Charlie had had his operation you began to notice Charlie's vast improvement, his punctuation, spelling and overall awareness was very noticeable to the readers. ...read more.

The story also raises some questions widely debated in everyday life. Could the scientists be accused of playing God by trying to improve Charlie's IQ? I don't believe that scientists and doctors should be trying to experiment with humans unless it's a life-threatening problem. Does society mistreat people who are "different"? I believe that there are some people who are discriminated because of unimportant little differences but I don't think its fair they are as normal as everyone else. The main character in the story 'Flowers for Algernon' is Charlie. Charlie has grown up his whole life not being too clever and its one of his dreams to become smart, he jumps at the chance to have the operation even though he doesn't really understand what the doctors are telling him. Before the operation Charlie was asked to complete some tasks, one was to race Algernon around a maze. ...read more.

Dr Strauss cared about Charlie more after the operation he came to Charlie's home to check and make sure he was all right. The story was written very well Daniel Keyes wrote it as if it was Charlie keeping a diary. It let the readers visualise how Charlie is at the start and how he improves after the operation because Daniel Keyes has made very obvious spelling mistakes and punctuation errors. We see how Charlie's awareness improves and he realises how na�ve he's been in the past. The story 'Flowers for Algernon' made me think how narrow minded people can be, there are a lot of people like Charlie who are mistreated just because they are not as clever as the average person. I felt really sorry for Charlie moving away and not having anyone close enough to stay with. I did enjoy the story but I don't think that it ended well I think it should have ended with us knowing what happened to Charlie. ...read more.