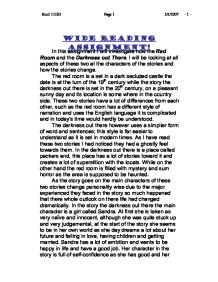 Red Room and the Darkness out There

Wide reading assignment! In this assignment I will investigate how the Red Room and the Darkness out There. I will be looking at all aspects of these two at the characters of the stories and how the stories change. The red room is a set in a dark secluded castle the date is at the turn of the 19th century while the story the darkness out there is set in the 20th century, on a pleasant sunny day and its location is some where in the country side. These two stories have a lot of differences from each other, such as the red room has a different style of narration and uses the English language it is complicated and in today's time would hardly be understood. The darkness out there however uses a simplier form of word and sentences; this style is far easier to understand as it is set in modern times. As I have read these two stories I had noticed they had a ghostly feel towards them. ...read more.

She then starts to realize that people change due to there life they had led and that many people have a hidden dark side, she also gain knowledge of how hard life can be, and its not a simple as she would like to think it was. The other helper who was helping her (Kerry Stephens), she saw him as a spotty and immature also she didn't think much of his appearance nor did her friends. On all this Sandra had made a judgement on him and also stereotyped him. Actually she was quite hostile towards him. " You can people all wrong," she said. Sandra knew that Kerry grow up much more but at the time she didn't realize that it was her who had matured. At this point Sandra's attitude on life had changed, this only happened as she let her mind take in the realities of life, now more mature Sandra had realized that the stories and myths of packers end weren't real. ...read more.

Fear that will not have the light or sound, that will not bear with reason, but darkness, deafeats, and overwhelms." He also realizes that he was wrong to people before he got to know them. The young man and Sandra had been affected by the events that had taken place, but in a way they had learned sum things about themselves that they never knew they had changed for the better and learned far more about themselves. Sandra learns that there are many selfish people in our world and is shocked to find out the darkness many people have in their hearts. Between the two stories Sandra has appeared to change the most. And if I had to chose on which person outer the red room and the darkness out there I would have to choose Sandra, as am I see the niceties in people, but on the judgement part I don't think I relate to her in that as I, do not judge a person before I get to know them. luke finch 11DD Page 1 5/1/2007 - 1 - ...read more.