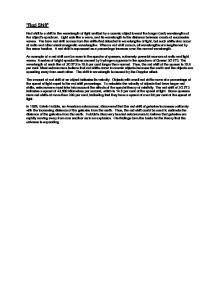 "Red Shift" Red shift is a shift in the wavelength of light emitted by a cosmic object toward the longer (red) wavelengths of the object's spectrum. Light acts like a wave, and its wavelength is the distance between crests of successive waves. The term red shift comes from the shifts first detected in wavelengths of light, but such shifts also occur at radio and other electromagnetic wavelengths. ...read more.

The wavelength of each line of 3C 273 is 15.8 per cent longer than normal. Thus, the red shift of the quasar is 15.8 per cent. Most astronomers believe that red shifts occur in cosmic objects because the earth and the objects are speeding away from each other. The shift in wavelength is caused by the Doppler effect. The amount of red shift of an object indicates its velocity. ...read more.

Some quasars have red shifts of more than 300 per cent, indicating that they have a speed of over 88 per cent of the speed of light. In 1929, Edwin Hubble, an American astronomer, discovered that the red shift of galaxies increases uniformly with the increasing distance of the galaxies from the earth. Thus, the red shift could be used to estimate the distance of the galaxies from the earth. Hubble's discovery has led astronomers to believe that galaxies are rapidly moving away from one another as in an explosion. His findings form the basis for the theory that the universe is expanding. ...read more.