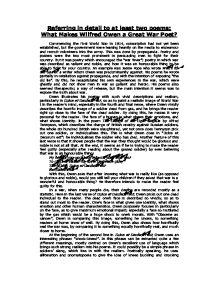 Referring in detail to at least two poems: What Makes Wilfred Owen a Great War Poet?

Referring in detail to at least two poems: What Makes Wilfred Owen a Great War Poet? Commencing the First World War in 1914, conscription had not yet been established, but the government were leaning heavily on the media to endeavour and recruit volunteers into the army. This was done by propaganda. Poetry and posters were the two most prominent in persuading men to fight for their country. But it was poetry which encouraged the "war fever"; poetry in which war was described as valiant and noble, and how it was an honourable thing to be able to fight for your country. An example was Jessie Pope who wrote Who's for the Game: a writer whom Owen was predominantly against. His poems he wrote partially in retaliation against propaganda, and with the intention of exposing "the old lie". By this, he recapitulated his own experiences in the war, which were ghastly and did not show men in war as gallant and heroic. His poems also seemed therapeutic; a way of release, but the main intention it seems was to expose the truth about war. Owen illustrates his poetry with such vivid descriptions and realism, particularly in Dulce et Decorum est, so as to paint a realistic image of World War I in the reader's mind, especially in the fourth and final verse, where Owen vividly describes the horrific image of a soldier dead from gas, and he brings the reader right up close to the face of the dead soldier. By doing this, he makes it very personal for the reader. ...read more.

This could be because Owen saw this so close and it was so shocking to him. However, although there is no hint to it in the poem save for "An ecstasy of fumbling", there could be a chance that the gas mask Owen 'won' might have been fought over by Owen and the dying soldier. The sight of watching the soldier die so horrifically could leave a sharp imprint of guilt upon Owen, such as that he would relive the moment when he sleeps, in his dreams. It also shows that Owen had been forced to buy such a nasty moment to be able to function, to do his job, during the day. However, when something has such an effect on someone, it cannot be buried, and it will come back to haunt the person, as it did with Owen when he slept. However, in order for one to be able to get over such an event, it must be remembered, and part of the reason Owen wrote this poem was as a method of self-therapy, to help him recover from the moment. Owen also uses an interesting order of words in these two lines, leaving the point where he speaks about the soldier actually dying, the most important bit, till last. Because of the such traumatic effect it has on him, such a thing to say would be very hard for Owen. In Exposure, Owen focuses in particular on describing most vividly the weather and psychological effects on them during this particular time. It shows also his experience in the war, as weather was a strong enemy to both sides and both sides were badly affected. ...read more.

created by propaganda of the time that it is glorious to fight for your country, that to be a soldier is to be heroic and fearless and honourable, is opposite to the actual reality of a war. The truth of events in a war, for example the soldier who died from the gas attack in Dulce et Decorum est, is very different from this ideal image, for to die in such a way is certainly not glorious to anyone. As Owen vaguely questions throughout his poems, if you are to die in such a horrific and grotesque way, is it truly worth dying for your country? For as Owen's retreatment into his mind in Exposure, where the soldiers suffer from severe homesickness, would one not prefer to make certain they shall return to their families to care for them, to ensure their safety, rather than die so nastily and leave their family to suffer under the effects of such a death? From each of Owen's poems, it is evident that his determination and passion to expose "the old lie" to the public drove him to write his poems to perfection, using poetic devices and languages to fill these poems with layers of meaning, some which only Owen will know of, as a method of self-therapy to help him recover from the psychological effects and traumatic stress of the war. It is very sad, therefore, that he should die at such a young age, just before the ending of the war where he should have (as many soldiers who did not should have) been able to experience peace once more and also the effects his incredible poetry had on people. ...read more.