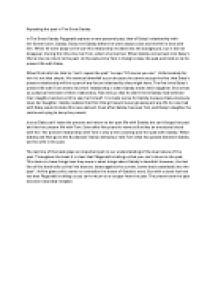 Repeating the past in The Great Gatsby

﻿Repeating the past in The Great Gatsby. In The Great Gatsby Fitzgerald explores a very personal past, that of Daisy's relationship with her former lover, Gatsby. Daisy met Gatsby before he went away to war and she fell in love with him. When he went away to the war this relationship receded into the background, but it did not disappear. During this time she met Tom, whom she married. When Gatsby comes back into Daisy's life he tries to return to the past. ...read more.

The first time Daisy's present life with Tom enters into their relationship is when Gatsby meets their daughter. She serves as a physical reminder of their relationship. Nick tells us that he didn't think Gatsby had believed their daughter existed until he saw her himself. It is made worse for Gatsby because Daisy obviously loves her daughter. Gatsby realizes that this little girl would never go away and any life he now had with Daisy would include this new element. Even after Gatsby has seen Tom and Daisy's daughter he continues trying to deny the present. ...read more.

The last line of the book plays an important part in our understanding of the dual nature of the past. Throughout the book it is clear that Fitzgerald is telling us that you can't return to the past. This desire to have things how they were is what brings about Gatsby's downfall. However, the last line of the book tells us that "we beat on, boats against the current, borne back ceaselessly into the past". At first glance this seems to contradict the lesson of Gatsby's story. But with a closer look we see that Fitzgerald is telling us you can't return to or escape from the past. The present and the past become inexorably mingled. ...read more.