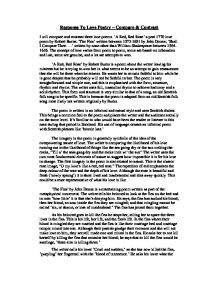 Response To Love Poetry - Compare & Contrast I will compare and contrast three love poems. 'A Red, Red Rose' a post 1770 love poem by Robert Burns; 'The Flea' written between 1572-1631 by John Donne; 'Shall I Compare Thee . . .' written by none other than William Shakespeare between 1564-1616. The concept of love varies from poem to poem, some are based on infatuation and lust, some are genuine, and a lot are attempts to woo. 'A Red, Red Rose' by Robert Burns is a poem about the writer leaving his mistress but he is trying to woo her in what seems to be an attempt to gain reassurance that she will be there when he returns. He wants her to remain faithful to him while he is gone despite that he probably will not be faithful to her. The poem is very straightforward and simple one, and this is emphasized with the form, structure, rhythm and rhyme. The writer uses full, masculine rhyme to achieve harmony and a solid rhythm. This form and structure is very similar to that of a song, an old Scottish folk song to be specific. ...read more.

The flea has joined them together. As his beloved goes to kill the flea he stops her, telling her to spare the three lives in the flea. This is his life, her life, and the flea's life. In the flea where their blood is mingled they are married and the flea is like their marriage bed and marriage temple mixed into one. Although their parents grudge their romance and she will not make love to him, they are still made one and mixed in the flea. He asks her to not kill herself by killing the flea that contains her blood; he says that to kill the flea would be sacrilege, "three sins in killing three." The writer calls his lover "Cruel and sudden," as she has now killed the flea, "purpling" her fingernail with the "blood of innocence." He asks his lover what the flea's sin was, other than having sucked from each of them a drop of blood. His lover replies that neither of them is weaker for having killed the flea. It's true, he says, and it proves that her fears are stupid: If she were to sleep with him, she'd lose no more honour than she lost when she killed the flea. ...read more.

The language, too, is quite simple for the sonnets; it isn't packed with alliteration etc. The writer opens the poem with a question addressed to the beloved: "Shall I compare thee to a summer's day?" The next eleven lines are based on similar comparisons. In line 2, the writer emphasises what mainly differentiates the man from the summer's day, he is "more lovely and more temperate." Summer's days tend toward extremes, they are shaken by "rough winds"; in them, the sun ("the eye of heaven") often shines "too hot," or too dim. And summer is passing: its date is too short, and it leads to autumn, as "every fair from fair sometime declines." The final lines of the sonnet tell of how the beloved is different from the summer in that respect: his beauty will last forever ("Thy eternal summer shall not fade...") and never die. In the couplet, the speaker explains how the beloved's beauty will achieve this, and not perish because it is preserved in the poem, which will last forever; it will live "as long as men can breathe or eyes can see." Evidently it has done just that as we explore the poem to this day. ...read more.