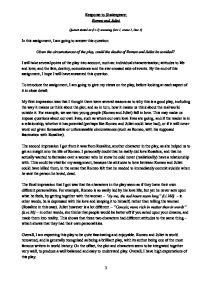 Response to Romeo and Juliet

Response to Shakespeare: Romeo and Juliet Quotes stated as (i.i.1) meaning (act 1, scene 1, line 1) In this assignment, I am going to answer this question: Given the circumstances of the play, could the deaths of Romeo and Juliet be avoided? I will take several points of the play into account, such as: individual characterisation; attitudes to life and love; and the fate, destiny, coincidence and the star-crossed side of events. By the end of this assignment, I hope I will have answered this question. To introduce the assignment, I am going to give my views on the play, before looking at each aspect of it in close detail: My first impression was that I thought there were several reasons as to why this is a good play, including the way it makes us think about the plot, and so in turn, how it makes us think about the real world outside it. For example, we see two young people (Romeo and Juliet) fall in love. This may make us impose questions about our own lives, such as where our own love lives are going, and if the reader is in a relationship, whether it has potential (perhaps like Romeo and Juliet could have had), or if it will never work out given foreseeable or unforeseeable circumstances (such as Romeo, with his supposed fascination with Rosaline). The second impression I got from it was from Rosaline, another character in the play, as she helped us to get an insight into the life of Romeo. I personally doubt that he really did love Rosaline, and that he actually wanted to fantasise over a woman who he knew he cold never (realistically) have a relationship with. This could be vital for my assignment, because the attitudes to love between Romeo and Juliet could have killed them, in the sense that Romeo felt that he needed to immediately commit suicide when he saw the person he loved, dead. ...read more.

However, more importantly for us with this assignment, it gives a us an impressions as to what the fiery character Tybalt is like. Tybalt is one of the main characters, and in his own right partly responsible for Romeo and Juliet's death. The story is very complicated, but basically, Tybalt kills Mercutio, Romeo's close friend, and so Romeo kills Tybalt. This forces Prince Escalus to banish Romeo from Verona, because he had already warned the town not to fight any more as he was sick of the conflict between everyone. This caused all the following events, mainly Friar Lawrence's plan for Romeo to return to Verona to collect Juliet, so they could leave Verona together. But this plan went wrong, and as we know, it ended up unintentionally killing them instead. Because of this, we could blame Tybalt for their deaths. Although it seems Romeo was to blame for being banished, I see this as an attack of revenge, and not a regular fight. Benvolio thinks this too... "But by and by comes back to Romeo, Who had but newly entertained revenge" (iii.i.173-174) In other words, Benvolio is saying that although it was a little harsh of Romeo to murder Tybalt (by entertaining revenge), it wasn't an act of murder, because Tybalt had done exactly the same thing as Romeo, only he murdered Romeo's best friend. I'm now going to talk about some other of the main characters who I think caused Romeo and Juliet's death... Friar Lawrence: Although Friar Lawrence only directly influenced the deaths once; he does influence them quite a lot indirectly. He mainly acts upon what Romeo and Juliet are faced with, and tries to sort it out for them. For example, Friar Lawrence comes up with the plan for Juliet to pretend she's died of grief, because of Tybalt's (her cousin's) death. "And, with wild looks, bid me devise some mean, To rid her from her second marriage" (v.iii.239-240) ...read more.

To conclude, I will put all this evidence together and try to form a clear explanation, as to what exactly killed Romeo and Juliet. I think that destiny, coincidence and the star-crossed theme is concerned, could have killed Romeo and Juliet - it all depends on how you look at it. If you took the fate idea in the Prologue (where it tells you of their deaths, as I explained earlier) seriously, then it would definitely be fate's fault. As far as the characters are concerned, I think that almost every character has been integrated together in a particular way; to all somehow kill Romeo and Juliet. I don't think there is one (main) character in the play that didn't do something or another, to either directly or indirectly contribute to their deaths in some way. Conflict played a reasonably large part in their deaths. The constant fighting in the streets made Prince Escalus banish anyone who was to fight (i.e. Romeo when he killed Tybalt). The conflict then though was due to the family feuds, as the fights were mainly between the Capulets and Montagues. It is hard to say, but I don't think this caused their deaths, simply because they weren't fought because of Romeo and Juliet. Overall, I couldn't say who or what killed Romeo and Juliet and be 100% sure of it, but I personally believe it was destiny. This reason may not seem justified as far as the actual play was concerned, but in the prologue, it tells of their deaths - this was a really important part, if not the most important part of the play... "From forth the fatal loins of these two foes, A pair of star-crossed lovers take their life" (prologue.5-6) Basically, we knew all along that they would die during the play, so we couldn't change what would happen to them - it was destiny. Therefore, to answer the question, I don't think that the deaths of Romeo and Juliet could have been avoided. 4 1 ...read more.