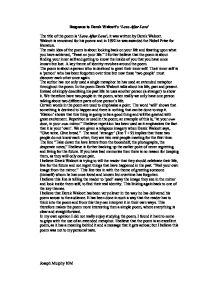 Response to Derek Walcott's 'Love After Love' The title of the poem is 'Love After Love', it was written by Derek Walcott. Walcott is renowned for his poems and in 1992 he was awarded the Nobel Prize for literature. The main idea of the poem is about looking back on your life and feasting upon what you have achieved, "Feast on your life." I further believe that the poem is about finding your inner self and getting to know the inside of you that you have once known but lost. A key theme of identity revolves around the poem. The poem is about a person who is destined to greet their inner self. ...read more.

'Elation' shows that this thing is going to be a good thing and will be greeted with great excitement. Repetition is used in the poem; an example of this is, "at your own door, in your own mirror." I believe repetition has been used as it emphasises the fact that it is your 'own'. We are given a religious imagery when Derek Walcott says, "Give wine. Give bread." The word 'stranger' (line 7 + 9) implies that these two people do not know each other; they are two new people meeting for the first time. The line "Take down the love letters from the bookshelf, the photographs, the desperate notes," I believe is further backing up the earlier point of never regretting and living for the future. ...read more.

This linking again back to one of the key themes. I believe that Derek Walcott has been very clever in the way he has delivered his poem across to the audience. It has been done in such a way that the reader has to think into the poem and from this they can interpret it in their own ways. This therefore makes the poem more interesting then a simple poem, where everything is clear and straightforward. In my own opinion I did not really enjoy studying the poem, I found it hard to come to grips with the use of an extended metaphor. I believe that the poem is an excellent poem, as it has a meaning behind it and a message that it gets across; but I believe this poem was not to my personal taste. Joseph Murphy 10M ...read more.