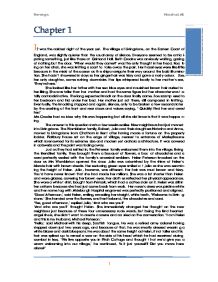 Chapter 1 It was the coldest night of the year yet. The village of Livingstone, on the Eastern Coast of England, was slightly quieter than the usual array of silence. Everyone seemed to be anticipating something, just like those at Grimond Hall. Beth Crooke was anxiously waiting, gazing at nothing but the door. 'When would they come?' was the only thought in her head. Rocking on her chair, she was knitting a scarf to take away the pain. Her hazel eyes were like little beacons in the midst of the ocean as the ships navigate their way around the bold illumination. She hadn't showered in days so her ginger hair was frizzy and gave a nasty odour. Zoe, her only daughter, came rushing downstairs. Her lips whispered loudly to her mother's ear, 'They're here.' She looked like her father with her sea blue eyes and nourished brown hair curled to her liking. She was taller than her mother and had the same figure but her character was totally contradistinctive. The long expected knock on the door finally came. Zoe scampered to her bedroom and hid under her bed. Her mother just sat there, still composed in knitting. Eventually, the knocking stopped and again, silence, only to be broken a few seconds later by the crashing of the front and rear doors and voices saying, 'Quickly! Find her and arrest her!' Mrs Crooke had no idea why this was happening but all she did know is that it was happening. The answer to this question starts a few weeks earlier. New neighbours had just moved into Livingstone. The Wombleton family, Robert, Julia and their daughters Natasha and Anne, moved to Livingstone from Chatham in Kent after having made a fortune on the property ladder. Pickbury House sat on the edge of village, nearest to entrance of MarleyBourne which is renowned for its extreme size and modern yet archaic architecture. ...read more.

'That better be true!' responded Camille and stormed back into her house. 'Just go away, Beth,' said Alexis. That evening, Ian returned back to the village. Alexis and Camille could be heard exchanging foul words. Ian also heard the shouts but ignored them. He drove through his gates and straight to MarleyBourne. Chapter 4 Beth knew that something was going to happen and she had to do something. She was in financial crisis. Her only means of avoiding bankruptcy was her own company, which happened to be an electronics company. But unlike 'IBouLive', she wasn't earning millions. She had just enough to keep herself going after Ian was sent to the mental asylum, but now he's back and stealing the market, Beth is finding it hard to cope with the pressure. The phone rang. Beth was scared. She slowly walked over to it, picked it up and took a deep breath. 'Mum!' said Zoe, 'Can you come and pick me up now?' Beth gave a sigh of relief, 'Get a taxi home!' she shouted over the phone. 'But mum! It's half past eleven at night.' 'I don't care. You're the one who decided to go in the first place.' 'Okay! But your paying for it,' Zoe hung up. Zoe called for a taxi but none of them would stop. Eventually one stopped and she stepped in. She told the driver her street name and he drove off. Twenty minutes later, she realised the driver was going the wrong way. 'Excuse me,' said Zoe, 'Where are you going?' The car suddenly stopped in the middle of a car park. The driver got out and went into the back. Zoe screamed but managed to get a glimpse of his eyes. She knew exactly who it was. Alexis. His wife left him that night and he was out to get revenge. He started tying her arms and legs together and said, 'Blame your mother for this,' 'Get off me you freak!' ...read more.

Her mother just sat there, still composed in knitting. Eventually, the knocking stopped and again, silence, only to be broken a few seconds later by the crashing of the front and rear doors and voices saying, 'Quickly! Find her and arrest her!' They found Beth at the front door and slowly moved towards her. This was it; Ian had almost got his revenge. A man standing behind her said, 'Bethany Crooke, I am arresting you on suspicion of Fraud and Bankruptcy, You do not have to say anything. But it may harm your defence if you do not mention when questioned something which you later rely on in court. Anything you do say may be given in evidence,' and grasped her wrists with ease and handcuffed them. Another man came running down from upstairs. 'There's a girl upstairs,' he said. The leader of the break-in replied, 'Arrest her and bring her down. We can question her at the station and if she is found to be innocent, we will send her into foster care.' After combing the whole house for evidence, they soon left the house and walked Beth and Zoe towards the car, where crowds were gathered around. Robert was amongst them and he simply thought, 'I bet Ian and Alexis are behind this.' Zoe was released after three days and taken to a foster care home in Scotland. Beth was kept at the police station and trialled in court after two weeks. She was convicted of trading with customers, even though she was bankrupt, and fraud, because Alexis left some counterfeit notes in the safe when he took the business contracts. She was later convicted of kidnapping her own daughter for publicity due to her mental state. She served three years in prison and was later moved to a mental asylum, the same mental asylum which she had sent Ian to, ten years before. As for Ian, he had fulfilled his desire. Revenge. ?? ?? ?? ?? Revenge. Naushad Ali. 1 ...read more.