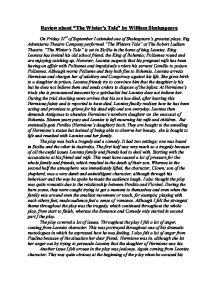 Review about "The Winter's Tale" by William Shakespeare On Friday 21st of September I attended one of Shakespeare's greatest plays. Big Adventures Theatre Company performed "The Winters Tale" at The Robert Ludlam Theatre. "The Winter's Tale" is set in Sicilia in the home of king Leontes. King Leontes has invited his old school friend, the King of Bohemia; Polixenes round and are enjoying catching up. However, Leontes suspects that his pregnant wife has been having an affair with Polixenes and impulsively orders his servant Camillo to poison Polixenes. Although warns Polixene and they both flee to Bohemia. Leontes arrests Hermione and charges her of adultery and Conspiracy against his life. She gives birth to a daughter in prison, Leontes friends try to convince him that the daughter is his but he does not believe them and sends orders to dispose of the infant. At Hermione's trials she is pronounced innocent by a spiritualist but Leontes does not believe her. During the trial shocking news arrives that his son has died, after hearing this Hermione faints and is reported to have died. Leontes finally realises how he has been acting and promises to grieve for his dead wife and son everyday. Leontes then demands Antigonus to abandon Hermione's newborn daughter on the seacoast of Bohemia. Sixteen years pass and Leontes is left mourning his wife and children. ...read more.

Due to the situation in which Leontes family were in, it cause the death of two people, which could also have killed the character of Perdita. When people get married, there has to be trust between the two people. Somehow within Leontes and Hermione's relationship that trust was lost which caused a breakdown within the marriage, but eventually was restored near the end of the play. The play also showed the beginning of a relationship, which was to later turn into a marriage. This was between Perdita and Florizel. It showed the build up of the romance and butterfly feeling effect you get when you see that person. Another main issue within the play was families. It showed that even after the worst possible mistakes people can make the closeness and the bond of a family is too strong to break. That even after accusing your wife of an affair, causing the death of your own son and demanding to abandon your own flesh and blood cannot stand in the way of the love that a family beholds. I felt that I understood the basis of the play. Although the language was Shakespearean, I could basically understand the theme of the play. Watching the actors also helped me to understand the play because of their facial expressions and the tone of their voices. ...read more.

A light was also flashed when there was a storm, which I thought worked perfectly against the sound effects of the lightning. I thought all the actors performed brilliantly. All emotions were portrayed perfectly, with good use of costume. Hermione played her character very well due to the nature of the scene where she was on trial after giving birth, she didn't seems embarrassed about having the blood stains and performed her character with great enthusiasm. After the performance I particularly remembered the character of the shepherds son, Clown, due to his comical acting and his accent. I thought all characters projected their voices well and I could hear everything said. I thought everyone of them stayed in character although at one point Perdita miss said one of her lines but carried on professionally as if it didn't happen. Overall I thought the performance was quite entertaining although the first half did seem to drag on a little bit. The whole performance was carried out professionally, which I was very impressed by. I really enjoyed the second half due to it comical nature and the insight into Perdita and Florizel's romance. If I were to recommend it to a friend I would make sure that they knew what the story was about before going because the first section is quite confusing and if you don't understand the first half then its quite unlikely that you would understand the second half. In conclusion I thought it was worth its money and a great play to go and see on a Friday night. ...read more.