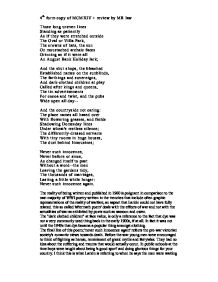 As if they were stretched outside

The Oval or Villa Park,

The crowns of hats, the sun

Grinning as if it were all

And the shut shops, the bleached

Established names on the sunblinds,

The farthings and sovereigns,

And dark-clothed children at play

Called after kings and queens,

For cocoa and twist, and the pubs

And the countryside not caring:

The place names all hazed over

With flowering grasses, and fields

With tiny rooms in huge houses,

The dust behind limousines;

Never before or since,

As changed itself to past

The thousands of marriages,

Lasting a little while longer:

The reality of being written and published in 1960 is poignant in comparison to the vast majority of WWI poetry written in the trenches that include often graphic representations of the reality of warfare, an aspect that Larkin could not have fully related. this so called 'aftermath poem' deals with the effects of war and not with the actualities of war as exhibited by poets such as sassoon and owen.
The "dark clothed children" at face value, is only a reference to the fact that dye was not a very commonly used thing back in the early 1900s, if at all. In fact it was not until the 1940s that dye became a popular thing amongst clothing.
The final line of this poem; 'never such innocence again' refects the pre-war victorian society's romantic views towards death. Before the war young men were encouraged to think of fighting as heroic, reminiscent of greek myths and fairytales. They had no idea about the suffering and trauma that would actually occur. In public schools at the time boys were taught about being 'a good sport' and doing glorious things for your country. I think this is what Larkin is referring to when he says the men were waiting as if outside 'the Oval or Villa Park'. No past experience can actually prepare then for the war but to them it must have seemed like a team effort, trying to win a victory for England as one might in cricket or football. This idea also highlights their innocence and makes this poem very poignant.
the 'moment in time' style of this poem captures how never after such terrible suffering will men be so keen or so unaware as they were in 1914. Larkin leaves this as open-ended. Is this innocence good or bad? it is up to the reader to decide.

The poem records some of the post world war impression from Larkin’s point of view and its effect on the urban and rural life of England. In post world war around 8.5 million men died. It is a symbolic poem on the degeneration of England’s urban and rural life.
Larkin says
‘Those long uneven lines
Standing as patiently
As if they were stretched outside
The Oval or Villa Park’
Means to say that the long uneven lines are of old people are stretched as they are standing outside oval or Villa Park
And comments
‘The sun
On moustached archaic faces
Grinning as if it were all
An August Bank Holiday lark’
The sun is shinning on historical smiling faces and the smile on faces express august bank holiday
Larkin symbolized the emptiness of towns with no men and says
‘And dark-clothed children at play’
Dark color symbolizes death, what Larkin means to say that even the children are mourning
Moving to country side he says
‘The place-names all hazed over
With flowering grasses, and fields
Shadowing Doomsday lines
Under wheat's restless silence’
Here he has symbolized the division of land line with doomsday lines under wheat’s restless silence, and symbolized 6the pathetic condition that
‘The differently-dressed servants
With tiny rooms in huge houses’
And in the end Larkin says that this is a matchless simplicity that thousands of men left their home knowing they wouldn’t be coming back. one cannot imagine such kind of simplicity
‘Never such innocence,
Never before or since’

“MCMXIV,” like many of Philip Larkin’s poems, is a meditation. This poetic form, modeled on John Donne’s prose Meditations, begins with a description of an object, a place, or an event. The description leads directly into a response or a consideration of the issues, problems, and complexities suggested by the object; this consideration then leads to a conclusion or resolution. In “MCMXIV” the object is a 1914 photograph of British volunteers lined up in front of an army recruiting office after England entered World War I. By extension the poem...