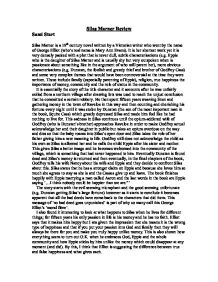 Silas Marner Review Sami Start Silas Marner is a 19th century novel written by a Victorian writer who went by the name of George Elliot (who's real name is Mary Ann Evans). It is her shortest work yet it is very densely packed with a plot that is never dull, subtle characterisations (e.g. Eppie who is the daughter of Silas Marner and is usually shy but very outspoken when is passionate about something like in the argument of who will parent her), more obvious characterisations (e.g. Dunstan, the foolish and greedy thief and brother of Godfrey Cass) and some very complex themes that would have been controversial at the time they were written. These include family (especially parenting of Eppie), religion, true happiness the importance of money, community and the role of status in the community. It is essentially the story of the title character and it accounts after he was unfairly exiled from a northern village after drawing lots was used to reach the unjust conclusion that he committed a certain robbery. ...read more.

Silas states that he has a stronger claim on Eppie and because she loves him so much she agrees to stay as she is and the Casses give up and leave. The book finishes happily with Eppie marrying a man called Aaron and the last words in the book are Eppie saying '...I think nobody could be happier than we are."' The story starts with the evil seeming triumphant and the good seeming unfortunate (e.g. Dunstan getting Silas's large fortune) however as it starts to conclude it becomes apparent that all the bad deeds have come back to the characters that did them. This message of 'no bad deed goes unpunished' is part of why so many call this George Elliot's 'moral fibre'. I also found it interesting to look at what happens to Silas when he lives for different things; for fifteen years his only passion in life is his money and he has no faith. Elliot says that it makes him happy but I am given the impression that she means it is the wrong type of happiness and that if you put ...read more.

I would give the book a 4/5 for difficulty of reading because of the long and dense sentences and the mature and complex issues that are dealt with. You can read the book more easily if you take less care and don't try to read between the lines however by doing this you would miss a lot of what the book is really about. Because of this I think that it is aimed at adults. It has a gripping storyline and so would be readable for younger people but I think only more mature readers would really understand it. I think that 'Silas Marner' is a very interesting book even if it may be slightly tough to read at parts. I found the Victorian style of writing quite challenging however I would definitely say that I finished it with a feeling of satisfaction and the more I thought about it the more I understood it and the more I looked deeper into it. For these reasons I give it a 3/5 for pleasure. ...read more.