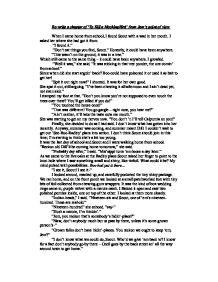 Rewrite a chapter of 'To Kill A Mockingbird' from Jem's viewpoint

Re-write a chapter of 'To Kill a MockingBird' from Jem's point of view When I came home from school, I found Scout with a wad in her mouth. I asked her where she had got it from. "I found it." "Don't eat things you find, Scout." Honestly, it could have been anywhere. "This wasn't on the ground, it was in a tree." Which still came to the same thing - it could have been anywhere. I growled. "Well it was," she said. "It was sticking in that tree yonder, the one comin' from school." Since when did she start arguin' back? Boo could have poisoned it or used it as bait to get her! "Spit it out right now!" I shouted. It was for her own good. She spat it out, still arguing. "I've been chewing it all afternoon and I ain't dead yet, not even sick." I stamped my foot at that. "Don't you know you're not supposed to even touch the trees over there? You'll get killed if you do!" "You touched the house once!" "That was different! You go gargle - right now, you hear me?" "Ain't neither, it'll take the taste outa me mouth." ...read more.

These are somebody's, I know that. See how they've been slicked up? They've been saved." "Yeah, but why should somebody wanta put away chewing-gum like that? You know it doesn't last." Hmmph. Add questioning to arguing. "I don't know, Scout. But these are important to somebody..." "How's that, Jem...?" "Well, Indian-heads - well, they come from the Indians. They're real strong magic, they make you have good luck. Not like fried chicken when you're not lookin' for it, but things like long life 'n' good health, 'n' passin' six weeks tests...these are real valuable to somebody. I'm gonna put 'em in my trunk." My gaze turned to the Radley Place. It's as if its got a magnetic field or somethin'. I started thinking about Boo in there...did he put the coins there? Does he want me to find it? I couldn't wait to show Dill. Two days left. Dill arrived in a blaze of glory; he had ridden the train by himself from Meridian to Maycomb Junction where he has been met by nice Miss Rachel in Maycomb's taxi. He had eaten dinner in the diner, he had seen two twins hitched together get off the train in Bay St Louis. ...read more.

I let Scout go first, and waited until she had rolled herself up inside. Then I pushed her with all my force. Good. What happened next I didn't expect at all. I forgave Scout at once when I saw she had rolled right into the Radley's gate! She was just lying there, as if she didn't know what was happening. "Come on, Scout, don't just lie there! Get the tyre! Bring it with you! Ain't you got no sense at all?" I realized I was screaming. And guess what? She didn't bring the tyre. I asked her why she didn't, and she argued back, asking why I couldn't get it. I could, that wasn't the point. But she thought she was challenging me. As if. "Go on, it ain't far inside the gate. Why, you even touched the house once, remember?" If she thought I was scared, she was wrong. Of course I wasn't, but I didn't like the way she was making me out to be some sort of chicken. I gave her an angry look, then got the tyre. It wasn't a big deal, she was just acting like a g-irl. "See there?" I said. "Nothin' to it. I swear Scout, sometimes you act so much like a girl it's mortifyin'." And it's true. ...read more.