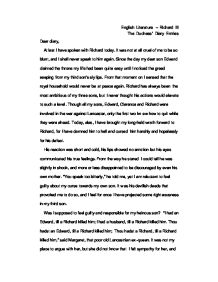 English Literature - Richard III The Duchess' Diary Entries Dear diary, At last I have spoken with Richard today. It was not at all cruel of me to be so blunt, and I shall never speak to him again. Since the day my dear son Edward claimed the throne my life had been quite easy until I noticed the greed seeping from my third son's sly lips. From that moment on I sensed that the royal household would never be at peace again. Richard has always been the most ambitious of my three sons, but I never thought his actions would elevate to such a level. Though all my sons, Edward, Clarence and Richard were involved in the war against Lancaster, only the first two knew how to quit while they were ahead. Today, alas, I have brought my long-held wrath forward to Richard, for I have damned him to hell and cursed him harshly and hopelessly for his defeat. His reaction was short and cold, his lips showed no emotion but his eyes communicated his true feelings. ...read more.

Day and night I observe Richard's actions, and I accuse him of the murder of poor Clarence, the princes, Hastings, or anyone else who got in his way. Well, a powerful duchess like me would always have her sources. The murderers come to plead for forgiveness which they shall never receive. Let aside my secret messengers, only a mother, if I would still call myself his, would know by intuition when a son commits his evils. For all those innocent lives he took away I shall never forgive him, never! Night has grown dark and bold; I shall rest and worry tomorrow. Dear diary, The dawn is breaking, and a light shines through almost as if hope is about to arrive. I await the denouement of the war, as I strongly yearn for Richmond's triumph. The hours pass and I can feel myself merging closer and closer towards the scent of hope and light for the royal household once more. Whilst we women of the court have no power over these pitiful greedy men, I strongly mourn for Lady Anne, for she is so ignorant to have married Richard. ...read more.

Dear diary, The battle had come and gone, just the way I had expected it to be. Richard has fallen on the battlefield beneath Richmond's feet, thus my son is no longer. He left me with such desperate choices that either he'd die before the war had a chance to make him triumphant, "Or I with grief and extreme age shall perish and never more behold thy face again." But alas "by God's just ordinance" he died shamefully and bloodily on the field. I have stayed faithful to my last words to him, which were "Bloody will be thy end! Shame serves thy life and doth thy death attend", and God finally took my side. This was my last aspiration of any sort towards my remaining lifespan, for my transient future only looks forward to Richmond bringing hope to the people. Otherwise, my husband, my sons, (including one of which whom became my enemy), are all dead, and my throne has long been taken, therefore I feel there isn't much left to live for, but only in the hope that the country may rise once more. ?? ?? ?? ?? ...read more.