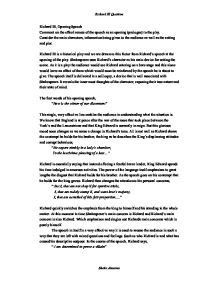 Richard III, Opening Speech - Comment on the effectiveness of the speech as an opening (prologue) to the play.

Richard III, Opening Speech Comment on the effectiveness of the speech as an opening (prologue) to the play. Consider the main characters, information being given to the audience as well as the setting and plot. Richard III is a historical play and we are drawn to this factor from Richard's speech at the opening of the play. Shakespeare uses Richard's character as his main device for setting the scene. As it is a play the audience would see Richard entering on a bare stage and this alone would leave an effect of them which would soon be reinforced by the speech he is about to give. The speech itself is delivered in a soliloquy, a device that is well associated with Shakespeare. It reveals the inner most thoughts of the character, exposing their true nature and their state of mind. The first words of his opening speech, "Now is the winter of our discontent" This single, very effective line enables the audience in understanding what the situation is. ...read more.

At this moment in time Shakespeare's main concern is Richard and Richard's main concern is also Richard. Which emphasises and singles out Richards main concerns which is purely himself. The speech in itself is a very effective way it is used to arouse the audience in such a way that they are left with mixed questions and feelings. Such as who Richard is and what has caused his descriptive outpour. In the course of the speech, Richard says, " I am determined to prove a villain" Quickly the audience is made to believe that evil, is the source of Richard's pleasure and that At no point in the duration of his speech does Richard hesitate to think or question himself. Which may show him to be a spontaneous person. As he continues Richard shares his plans quite intimately and very generously with the audience. He tells us that he has caused trouble between his brothers, George, Duke of Clarence and King Edward. We are made of Richard's true treacherous nature when he says, "Dive, thoughts, down to my soul: here Clarence comes.." ...read more.

It is right at the beginning of the play so it is a source of information, which gives us details and clues about background and characters as well as potential plot lines. In picturing Richard as if in a production, I imagine a deformed middle aged man who is desperately trying to win over the audience. His speech is powerful and is a brilliant demonstration of his persuasive powers. To me he is attempting to coerce the audience into sympathising with him and to seeing things from his point of view because there are always two sides to a coin. I don't think that he actually manages to achieve this but he does mange to stir them up and have some bias or some understanding into his motive before other characters are introduced into the play. He does not want us to convict him but because the speech is a soliloquy what is being portrayed is what Richard is actually thinking and not what he is pretending to be. So he is showing his true colours right from the beginning so that we know Richards demeanour from the outset. Richard III Question Sheila Abaniwo ...read more.