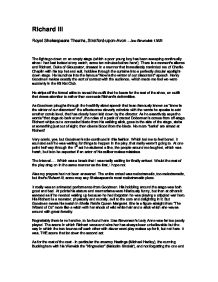 Richard III Royal Shakespeare Theatre, Stratford-upon-Avon - Joe Strudwick 13SR The lights go down on an empty stage (which a poor young boy has been sweeping continually since I had last looked at my watch, some ten minutes before hand). There is a moment's silence and Richard, Duke of Gloucester, dressed in a manner that immediately reminded me of Charlie Chaplin with his top hat and suit, hobbles through the curtains into a perfectly circular spotlight-down stage. He launches into the famous "Now is the winter of our discontent" speech. Henry Goodman makes exactly the sort of contact with the audience, which made me feel we were suddenly in the Kit Kat Club. He strips off the formal attire to reveal the outfit that he bears for the rest of the show, an outfit that draws attention to rather than conceals Richard's deformities. ...read more.

The interval..... Which was a break that I was really waiting for finally arrived. Would the rest of the play drag on in the same manner as the first, I hope not. Alas my prayers had not been answered. The entire ordeal was melodramatic, too melodramatic, but that's Richard III, some may say Shakespeare's most melodramatic piece. It really was an animated performance from Goodman. His hobbling around the stage was both good and bad. At points his stature and mannerisms were hilariously funny, but then at others it seemed as if he needed waking up because he had forgotten he was playing a crippled war hero. His Richard is a monster, physically and morally, evil to the core and delighting in it. But Goodman meets his match in Sheila Reid's Queen Margaret. She is a figure straight from "The Wizard of Oz" more like a witch with her shock of wild white hair and a stick which she waves around with great ferocity. ...read more.

But I still feel this is a play about the dynamics of power rather than the pathology of performance and that too much emphasis has been placed on Richard as showman rather than single-minded seeker of the hollow crown. I get the impression that directors of Shakespeare, even at the RSC, feel the need to be different, to use an off-the-wall approach so as to showoff their individuality and personality in the play, and often not only do they fail abysmally but they bore the audience to near death. I know Richard III is one of Shakespeare's most performed pieces, and this thought must circulate around the minds of all directors who decide to take up the challenge of putting on a show of it's nature. But, I am still yet to see a performance of this play that keeps me entertained for the full 3 hours, rather than thinking about why we didn't pay a little extra to sit in the comfier seats that are closer to the show. ...read more.