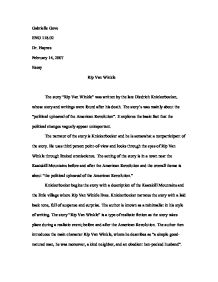 He was also dressed in Danish-like clothes. The little man was holding a keg filled with some kind of liquor and he bade Rip to help carry it and to come with him. They came upon a clearing where there were more little men and they were drinking liquor and playing a game of nine-pins which made a sound like "distant thunder". The little man made Rip serve the liquor to Gove 3 the other men. Rip tasted some of the liquor and it was so good that he went back for more. The liquor made him go into a stupor and then into a deep sleep. When Rip wakes up, he finds his gun rusted away, his dog gone and the little men gone too. He returns to his village and finds unfamiliar people dressed in a different fashion. Rip then also finds out that he has grown a foot long beard! He goes to his house and finds it "gone to decay-the roof fallen in, the windows shattered, and the doors off the hinges." He goes to the village inn and finds it gone with a building called "The Union Hotel" in its place. ...read more.

The woman replied that she died after having an affair with another man. This part of the story has the use of cosmic irony because it was a twist of fate that Dame Van Winkle's heckling of Rip led him to harbor deep feelings of resentment of her that he ran out and met the little men with the tankards of alcohol that made him fall asleep for 20 years. When he woke up and found out that his wife was dead he felt relieved and comforted. Rip then embraced his daughter and declared to her that he is her father Rip Van Winkle and if no one recognized him. Everyone was amazed and wondered what had happened to him. Rip then told his story to everyone and some were skeptical and some winked to each other. Rip Van Winkle went to live with his daughter and her family. He then learned that King George no longer governed the colonies and that he was now a free citizen of the United States. Rip soon put his life back together. All in all, I found this story very interesting. It was a story about the "political upheaval of the American Revolution." But it was very good to read and it kept me in suspense of what was to happen next. ...read more.