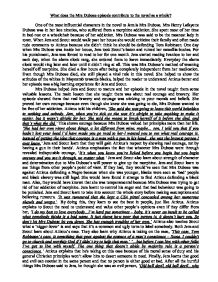 What does the Mrs Dubose episode contribute to the novel as a whole? One of the most influential characters in the novel to Jem is Mrs Dubose. Mrs Henry Lafayette Dubose was in her late nineties, who suffered from a morphine addiction. She spent most of her time in bed-rest or a wheelchair because of her addiction. Mrs Dubose was said to be the meanest lady in town. When Jem and Scout would walk past her house she would criticize their family and often made rude comments to Atticus because she didn't think he should be defending Tom Robinson. One day when Mrs Dubose was inside her house, Jem took Scout's baton and ruined her camellia bushes. For his punishment, Jem was forced to read to her for one month. Jem started reading Ivanhoe to her and each day, when the alarm clock rang, she ordered them to leave immediately. Everyday the alarm clock would ring later and later until it didn't ring at all. This was Mrs Dubose's method of weaning herself off morphine. She died a few hours after being completely independent from her medication. Even though Mrs Dubose died, she still played a vital role in this novel. She helped to show the attitudes of the whites in Maycomb towards blacks, helped the reader to understand Atticus better and her episode was a big learning experience for Jem and Scout. ...read more.

of a man's conscience - Scout, I couldn't go to church and worship God if I didn't try to help that man.' '...but before I can live with other folks I've got to live with myself. The one thing that doesn't abide by majority rule is a person's conscience.' Atticus explains that he's taking on this case because of his moral sense of duty and his general Christian principles won't allow him to desert someone in need. Finally, Jem learns that good and evil can coexist in the same person and that no person is either good or bad. After all the hurtful things Mrs Dubose said to Jem, he thought she was an evil person, 'Old hell devil, old hell devil...why can't she leave me alone?' However, when she died, she left Jem a white camellia which showed that she understood Jem's anger and his feelings. At first Jem found it hard to believe that Mrs Dubose had done something decent, but then he understood that no one person is good or bad. I think the character of Mrs Dubose helped to bring out Scout's, Jem's and Atticus's characters and showed us what they were capable of. She brought out the worst in Jem when he destroyed her flowers. Previously in the book, Jem was more mature than Scout and therefore less likely to do something like this. ...read more.

It can lead to abuse to the family. The white people are thought to be better than the blacks. Mrs Dubose says to Jem, 'Your father's no better than the niggers and trash the works for.' I think Mrs Dubose speaks for most of the other inhabitants in Maycomb when she talks about Atticus and his case. People don't think Atticus should be defending a Negro. Black people aren't treated with the same respect as white people. This is shown when it says that Mrs Dubose had a young black girl named Jessie who was in constant attendance. This shows that she is viewing her with less importance. Overall, Mrs Dubose's episode contributes a lot to the novel as a whole. It helps Jem and Scout to mature and grow up and it also teaches them many important lessons in life eg true courage, bravery and determination. The episode helps us the understand more about Atticus and what he is like. It shows that he is a genuinely 'good' person and believes in equality and justice. It brings out Jem's and Scout's personalities more and it also reminds us in some ways that they are still children. The episode shows us about the status of Negroes and that they were treated badly at that time. Finally, it also leads us onto Atticus's case and how he is determined to bring justice to Maycomb when he says, 'when you know you're licked before you begin, but you begin anyway and see it through no matter what.' ...read more.