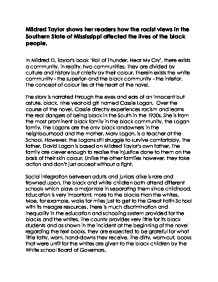 Roll Of Thunder, Hear My Cry.

Mildred Taylor shows her readers how the racist views in the Southern State of Mississippi affected the lives of the black people. In Mildred D. Taylor's book 'Roll of Thunder, Hear My Cry', there exists a community, in reality, two communities. They are divided by culture and history but chiefly by their colour. Therein exists the white community - the superior- and the black community - the inferior. The concept of colour lies at the heart of the novel. The story is narrated through the eyes and ears of an innocent but astute, black, nine year old girl named Cassie Logan. Over the course of the novel, Cassie directly experiences racism and learns the real dangers of being black in the South in the 1930s. She is from the most prominent black family in the black community, the Logan family. The Logans are the only black landowners in the neighbourhood and the mother, Mary Logan, is a teacher at the School. However, the Logans still struggle to survive comfortably. The father, David Logan is based on Mildred Taylor's own father. ...read more.

They accept it because they are either intimidated by the whites or accustomed to their treatment. However, the Logan family differ and they take direct action wherever and whenever possible. We see this through the stance that Little Man takes on receiving his glorious 'new' book. Later on, when Miss Crocker comments to Mary Logan: '"Why they got so upset about it, I'll never know."' We realise the acceptance of the people, even the educated. Initially, Cassie Logan does not understand the unofficial apartheid. She does not believe in it nor does she realise that it exists. She only learns of the differences and the unspoken rules halfway through the book, in Strawberry. Her bafflement at the reason for parking the wagon at the back is genuine. Her innocent logic says that they should park at the front for better marketing as there is space available. However, Big Ma simply says: '"Them's white folks' wagons, Cassie."' This gives Cassie the first insight to racial division in the outside world. The trip to Strawberry is a growing up experience for Cassie. Many racial incidents occur here. At the Barnett Mercantile, when Mr. ...read more.

He does not realise that he is being used as a scapegoat. Eventually, he is put on trial for the murder of Jim Lee Barnett and for attempted robbery. Nobody in this little county is prepared to take a black boy's word against the word of two white men. Race is of grave importance here. It determines the life or death of a young and innocent black boy. Cassie sees the evils of the white people through the burning of the Berrys. The effects of racism in the adult world are severe. Mr. Berry is burnt beyond belief and one of his nephews is tarred and feathered and dies. However, the Wallaces gloat about their actions and whilst everyone is aware that it was them who had committed such acts of terror, they are never charged with any crime. All in all, the protagonists here are the black people and the antagonists are the white people. The racist views of the whites have a great, negative impact on the lives of the blacks. The Logan family try to stand up for themselves and make a difference however, their efforts are not effective enough to change everybody's lives, but only their own. ...read more.