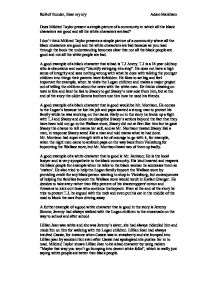 Roll Of Thunder, Hear My Cry

Does Mildred Taylor present a simple picture of a community in which all the black characters are good and all the white characters are bad? I don't think Mildred Taylor presents a simple picture of a community where all the black characters are good and the white characters are bad because as you read through the book the understanding becomes clear that not all the black people are good and not all the white people are bad. A good example of a black character that is bad is T.J Avery. T.J is a 14 year old boy who is obnoxious and cocky "Jauntily swinging into step". He does not have a high sense of integrity and sees nothing wrong with what he does with talking the younger children into things their parents have forbidden. He likes to act big and feel important for example, when he visits the Logan children and makes a major project out of telling the children about the news with the white men. ...read more.

Mr. Morrison had super strength with a lot of courage to go with it, for example, when the night men came to ambush papa on the way back from Vicksburg for boycotting the Wallace store, but Mr. Morrison beats two of them up badly. A good example of a white character that is good is Mr. Jamison; He is the local lawyer and is very sympathetic to the black community. His kind hearted and respects the black people for example when he talks to the black woman he addresses them as 'ma'am'. He also tried to help the Logan family boycott the Wallace store by providing credit for any black person wanting to shop in Vicksburg, but consequences of helping the families boycott the Wallace store would result in Harlan Granger. He decides to take sixty rather than fifty percent of his sharecroppers' cotton and threatens to kick out those who continue the boycott. ...read more.

Towards the end of the story R.W and Melvin take T.J to help them break in to the Barnett store to steal the gun T.J had wanted, but they actually wanted to take the money in the safe but when Mr. Barnett came down stairs he just saw T.J and assumed that R.W and Melvin were black because they had their face covered. R.W and Melvin kill Mr. Barnett by hitting him with an axe on the head and they injured Mrs. Barnett, and T.J had threatened to tell of them but they severely beat him up and then frame him by saying they saw him running away from the Barnett store, and they had driven to the pool hall and had an alibi there. R.W and Melvin lead the mob to T.J and they break in to the Avery house and try to kill him. Roll of thunder, Hear my cry Adam Markham ...read more.