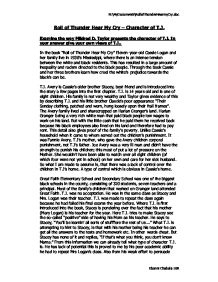 Roll of Thunder Hear My Cry - Character of T.J. Examine the way Mildred D. Taylor presents the character of T.J. In your answer give your own views of T.J.. In the book "Roll of Thunder Hear My Cry" Eleven-year-old Cassie Logan and her family live in 1930's Mississippi, where there is an intense tension between the white and black residents. This has resulted in a large amount of inequality and racism directed to the black people. Through the book Cassie and her three brothers learn how cruel the white's prejudice towards the black's can be. T.J. Avery is Cassie's older brother Stacey, best friend and is introduced into the story a few pages into the first chapter. T.J. is 14 years old and is one of eight children. His family is not very wealthy and Taylor gives evidence of this by describing T.J. and his little brother Claude's poor appearance "Their Sunday clothing, patched and worn, hung loosely upon their frail frames". The Avery family lived and sharecropped on Harlan Granger's land. Harlan Granger being a very rich white man that paid black people low wages to work on his land. But with the little cash that he paid them he received back because his black employees also lived on his land and therefore had to pay rent. This detail also gives proof of the family's poverty. Unlike Cassie's household when it came to whom served out the children's punishment. It was Fannie Avery, T.J's mother, who gave the Avery children corporal punishment, not T.J's father. Joe Avery was a very ill man and didn't have the strength to punish his children; this must of put a lot of pressure on the Mother. She wouldn't have been able to watch over all eight children (of which four were not yet in school) on her own and care for her sick husband. So what I am made to assume is, that there was a lack of control over the children in T.J's home. ...read more.

hurriedly went after Stacey and the others in an attempt to convince the others of his innocence. But they weren't going to allow themselves to be easily persuaded. T.J begins his plea with declaring that Little Willie had been wrong. That he had only said that to cover his own tracks because it was really him that told on Mrs. Logan. "I'm gonna beat him to a pulp, 'round here tellin' everybody I got Miz Logan fired" Cassie wasn't impressed by T.J's words and exclaimed, "Ah, stop lying T.J., don't nobody believe you." Stacey, Christopher-John and Little Man all agreed with Cassie. T.J. couldn't understand that they didn't want to hang round with him until Stacey turned his back on him. "Leave us alone. We don't want no more to do with you." This is when it finally hit T.J that his friends had left him and he became angry by this he screams that he didn't need them anymore, that he was too old to hang round with little kids like them. In the end he shouted, " Got me better friends than y'all! They give me things and treat me like a man...and they white too...." How foolish of T.J. he thinks if some one gives him things they are good friends, and if they're white they are ultimately better friends than Stacey and the others. We learn that the white boys that T.J. had been hanging round with were Jeremy's older brothers R.W. and Melvin, they are both either eighteen or nineteen. On the way to school Jeremy notifies Stacey and the others that his brothers hadn't been treating T.J. very well. He tells them that R.W. and Melvin had invited T.J. into their house when his father wasn't home. "They treated him almost friendly like, but when he left they laughed and talked 'bout him - called him names." R.W. ...read more.

So back the Avery home Mr. Jamison had jumped in his car and blocked off the road so that none of the men could get passed with T.J. When suddenly Mr. Granger came flying out of his house yelling, "There's smoke coming from my forest yonder! Give that boy to Wade like he wants and get on up there!" Like Mrs. Logan had predicted all that was needed to save T.J's life was to have Mr. Granger say the word. That night both blacks and whites worked together side by side to save the land. Following the fire Mr. Jamison visited the Logan house to see Mr. Logan and warned him that he should keep out of the T.J. situation otherwise people will think he should lose more than a quarter of his land. "Or somebody might just get to wondering about that fire." Here we are made to assume that it was Mr. Logan that set his own land on fire, in a sacrificial attempt to save T.J. Mr. Jamison. Also came with some bad news Mr. Barnett had died that morning this would mean that because T.J. was the only person identified, he would get accused of murder. If found guilty he would serve a death sentence. Stacey and Cassie were both devastated when their father told them this information. Stacey was extremely hurt by the news that he ran off into the woods. He knew that their wasn't any evidence at all to find T.J. innocent and he would ultimately die. The problem with T.J was he never thought before he acted, which had some serious consequences. Also he didn't have any common sense to see what was really going on around him, he became blind to the obvious. Finally I think T.J. was overall an attention seeker that's the reason why he done the things he did. He wasn't obtaining enough attention at home so he looked for it somewhere else. But unfortunately he looked in the wrong places and it ended him into to trouble, which ultimately ended him. N:\MyDocuments\RollofThunderHearmyCry.doc Ebonni Chabala 10R ...read more.