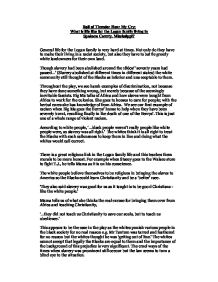 Roll of Thunder Hear My Cry; What is life like for the Logan family living in Spokone County, Mississippi?

Roll of Thunder Hear My Cry; What is life like for the Logan family living in Spokone County, Mississippi? General life for the Logan family is very hard at times. Not only do they have to make their living in a racist society, but also they have to battle greedy white landowners for their own land. Though slavery had been abolished around the 1860s' 'seventy years had passed...' (Slavery abolished at different times in different states) the white community still thought of the Blacks as inferior and unacceptable to them. Throughout the play, we see harsh examples of discrimination, not because they have done something wrong, but merely because of the seemingly inevitable fascists. Big Ma talks of Africa and how slaves were bought from Africa to work for the colonies. She goes to houses to care for people; with the herbal cures she has knowledge of from Africa. We see our first example of racism when Big Ma goes the Berrys' house to help when they have been severely burnt, resulting finally in the death of one of the Berrys'. This is just one of a whole range of violent racism. According to white people, '...black people weren't really people like white people were, so slavery was all right.' The whites think it is all right to treat the Blacks with such callousness to keep them in line and doing what the whites would call correct. There is a great religious link in the Logan family life and this teaches them morals to be more honest. ...read more.

The Logans look after what they have and try to keep clean. E.g. Little Man, 'Always meticulously neat...never allowed dirt or tears or stains mar anything he owned.' The Logan children are also lucky that they have the luxury of an animal skin as a rain mac to keep them dry on their arduous journey to Great Faith Elementary and Secondary School. Later in the book, Mama goes to church in her Sunday best clothing; we see that she lines her shoes with cardboard to keep them for longer and to hide the hole in her shoes. They make their belongings last. The Logan family are better off because they own land. On the land, they plant and sell cotton. The Logans' bought two of the four hundred acres in 1887 and a further two hundred acres in 1918. The other more recent of the two lots of land had a mortgage to pay off and all of it had taxes. (Recent depression meant that cotton prices dropped (1930) so Papa had to work on the railroads.) Papa has to work on the railroads to pay the taxes. He works in Louisiana in the warmer months and returns there in spring. The land makes them different and they have an advantage over other families as they have more money for necessities. The Logan children are different from other black children such as the Avery children as they respect their parents and each other a lot more. As shown when Cassie stands up for Little Man when the books are revealed to be old and used. T.J. ...read more.

Because they own land, the Logan's can afford to shop in Vicksburg and are not obliged to bow to the whims of landlords as sharecroppers are. For the Logans, unlike Mr. Granger who sees the land as a symbol of his family's 'rightful' domination over blacks and a means of income, the land is essentially linked to family. Papa says that it doesn't matter whose name the deed is in: it will always be "Logan land." It is only when Cassie realizes the true seriousness of the threats to her family and their land that she cries "for...the land." Cassie now understands the importance of the land. The link it has with independence, The Whites are so envious of the Logan land, that they would not have a problem with killing the Logan family. Because the Logans are Black and the Whites think of them as inferior, White people are resentful that a Black family can be better off than them. Lillian-Jeans' father pushing Cassie into the road shows this because the Simms family are not as well off as the Logans as they do not own land but are socially higher because they are White. I think the Logan children are 'trained' well in the ways of the harsh reality of racism. They are shielded from most of the racism, which their parents hide from them E.G. the Berrys' burning, but are suddenly ensnared into racism in Strawberry and are given a shock, especially Cassie, which gives us a real sense of impact that life in Spokane County must have had on the Logan family as the children are more aware about the society they live in at the end of the book. ...read more.