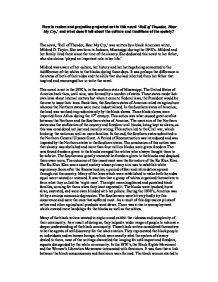 How is racism and prejudice projected out in this novel 'Roll of Thunder, Hear My Cry,' and what does it tell about the culture and traditions of the society? The novel, 'Roll of Thunder, Hear My Cry,' was written by a black American writer, Mildred D. Taylor. She was born in Jackson, Mississippi during the 1940's. Mildred and her family lived there since the time of the slavery. She dedicated this novel to her father, who she claims 'played an important role in her life.' Mildred was aware of her culture, her history and her heritage being connected to the indifference of the whites to the blacks during those days. It was perhaps the difference in the status of both of their sides and the skills that she had inherited from her father that inspired and encouraged her to write the novel. This novel is set in the 1930's, in the southern state of Mississippi. The United States of America back then, until now, was formed by a number of states. These states made their own laws about internal matters but when it came to Federal laws, the President would be the one to issue their laws. Back then, the Southern states of America relied on agriculture whereas the Northern states were more industrialized. In the Southern states of America, the land was worked on predominantly by the black slaves. These black slaves were imported from Africa during the 17th century. This action was what caused great conflict between the Northern and the Southern states of America. The main aim of the Northern states was the unification of the country and freedom to all blacks, being kept as slaves, as this was considered not just and morally wrong. This action led to the Civil war, which broke up the nation as well as more families. In the end, the Southern states submitted to the Northern General Ulysses Grant. ...read more.

As they passed by, they realized that it was the Wallace family that gave them way and noticed shock plastered on their faces. The car in this context symbolizes both power and status. The readers come to the conclusion that the only people, who assumed to have cars, in those days, were the whites. But this statement is proven untrue by Uncle Hammer. Hammer having a car just proves that the blacks can achieve the equality they deserved if they strive for it. It makes Uncle Hammer an equal to Harlan Granger. On Christmas Eve, the whole Logan family, along with Uncle Hammer and Mr. Morrison, stayed late at night. They sat together and shared stories with the Logan children. Mr. Morrison retells the events that led to his family's death. Mr. Morrison's parents hid two black boys, that the night men were after. But those boys never got to finish telling the Morrison's their story. The night men had already barged into their home and started fighting them off, killing them in the process and burned them out. Mr. Morrison was the only one who survived that fire. At first Mama, Mrs. Logan didn't want her children to hear Mr. Morrison's story, but Papa permitted them to hear it as this event was connected to their history. It was how the blacks were treated for the slightest mistake they committed, and it didn't matter whether it was fact or accusatory, in their world the whites would always be right regardless of reason. The tension between the blacks and whites soon arises as the night men are said to have ridden again. The tension had been building up for quite some time, it started with Sam Tatum. Sam was tarred and feathered alive by the night men when he complained that the Wallaces' were charging him extra for items he didn't buy, when he shopped at Wallace store. ...read more.

The theme of family is also seen by the unity the Logan children displayed when they punished the whites for splashing them with mud. It is also found in the way the adults deal with the issues they encounter. The Logans use a certain technique to educate their children; through communication. They communicate and explain things to them in the calmest way possible. Although there were minor times violence was used on the Logan children, their parents tried the best they could to avoid spanking them often. The Logans are bonded by ties and values that they treasure dearly. They look out for each other and try to do everything in their power to do the right things. They assist their fellow blacks in times of crisis. The novel, 'Roll of Thunder, Hear My Cry,' proves that there is a reason for everything. Moreover, the readers discover that all actions have consequences. They realize that the attitudes of the characters are significant but at certain times unexpected. Racism between the blacks and the whites can be abolished, if they wanted to. The only difference between the black and the white people was colour. Other than that, they can be equal in their society. The fire caused the whites to work alongside with the blacks. It just proves that there can be harmony among them if they choose to. It doesn't matter what race you're from or what the color of your skin is, because before God everyone is equal. It is obvious to the readers that this inequality between blacks and whites is only a result of pride and domination. Besides that all the characters in the novel are capable of achieving equality. The whites just need more help to realize this fact. It is here that the act of converting 'impossible' to 'possible' takes place. Apart from this, both the black and white people should understand that regradless of their position in society or the colour of their skin or the race that their from, they are all equal people in front of God. ?? ?? ?? ?? ...read more.