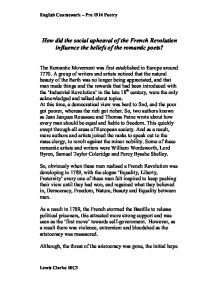 Romantic Poets - How did the social upheaval of the french revolution influence the beliefs of the romantic poets?

How did the social upheaval of the French Revolution influence the beliefs of the romantic poets? The Romantic Movement was first established in Europe around 1770. A group of writers and artists noticed that the natural beauty of the Earth was no longer being appreciated, and that man made things and the rewards that had been introduced with the 'Industrial Revolution' in the late 18th century, were the only acknowledged and talked about topics. At this time, a democratical view was hard to find, and the poor got poorer, whereas the rich got richer. So, two authors known as Jean Jacques Rousseau and Thomas Paine wrote about how every man should be equal and liable to freedom. This quickly swept through all areas of European society. And as a result, more authors and artists joined the ranks to speak out to the mass clergy, to revolt against the minor nobility. Some of these romantic artists and writers were William Wordsworth, Lord Byron, Samuel Taylor Coleridge and Percy Bysshe Shelley. So, obviously when these men realised a French Revolution was developing in 1789, with the slogan 'Equality, Liberty, Fraternity' every one of these men felt inspired to keep pushing their view until they had won, and regained what they believed in, Democracy, Freedom, Nature, Beauty and Equality between men. ...read more.

This was something that they strongly believed in. In the first stanza it say's "Ye clouds! That fare above me float and pause, which's pathless march no mortal may control!" this is basically saying that this natural army cannot be defeated by any man. He has used personification to present nature as a dominating force, which nothing will stop from achieving its goal. Throughout this first stanza the poet seems strongly pre-occupied by nature, and how nature, freedom and equality would triumph. He uses it a lot of imagery for example, "rising sun" and "unconquerable sound" this gives an image of how nature is unbeatable. During the second stanza he used more of the same poetical devices to show how France took a stand against the social structure, the monarchy and the aristocracy. Firstly is the line "When France in wrath her giant limbs upreared", this shows how France revolted, also by using words like 'limbs' and 'upreared' it gives a great image of a horse in anger, this represents France's actions, and how they overcame their enemy. Secondly, he uses the line "Stamped her strong foot" and said "she would be free". Once again he uses personification and imagery to portray visually France revolting as if it was someone who had had enough of being treated poorly and is taking a stand for themselves, as France in the poem represents the people of France. ...read more.

This gives the idea that like God had made Jesus, did he make us as well? So the reader also gets the impression from the poem that the lamb evolved into the tiger, just the same way a hopeful and optimistic French society evolved into a more disillusioned, pessimistic society. This shows a connection between 'The Lamb' being innocent and optimistic reflecting society before the revolution, and on the other hand 'The Tyger' being more experienced yet negative, reflecting society after the revolution. So, William Blake combined both his beliefs of being a Christian and a Romantic with society's view, and showed this throughout both poems. The difference in these two poems also shows how the Romantics were influenced throughout the revolution, and gives an insight into how society's attitude changed aswell. In conclusion, the French Revolution turned the hopes of the romantic poets into disillusion as the horrific events unfolded before them. The social upheaval throughout the revolution influenced the romantic poets to write about hope and freedom, yet as the revolution transpired their work reflected the disillusion and anger felt afterwards, as the poets never fully achieved what they were fighting for. As the revolution grew their work got more negative and brutal, yet before the revolution their work was more optimistic and joyous, as the unforeseen destruction hadn't influenced them yet. English Coursework - Pre 1914 Poetry Lewis Clarke 10C3 ...read more.