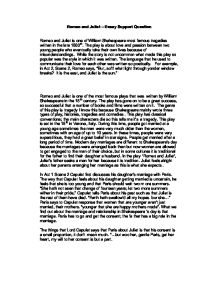 Romeo and Juliet - Essay Support Question Romeo and Juliet is one of William Shakespeare most famous tragedies written in the late 1500th. The play is about love and passion between two young people who eventually take their own lives because of misunderstandings. While the story is not uncommon what made this play so popular was the style in which it was written. The language that he used to communicate their love for each other was written so poetically. For example, in Act 2, Scene 2, Romeo says, "But, soft! what light through yonder window breaks? It is the east, and Juliet is the sun." Romeo and Juliet is one of the most famous plays that was written by William Shakespeare in the 15th century. ...read more.

get engaged to the man of their choice, but in some cultures it is traditional for the father to find their daughter a husband. In the play 'Romeo and Juliet', Juliet's father seeks a man for her because it is tradition. Juliet feels alright about her parents arranging her marriage as this is what she expects. In Act 1 Scene 2 Capulet first discusses his daughter's marriage with Paris. The way that Capulet feels about his daughter getting married is uncertain, he feels that she is too young and that Paris should wait two more summers. "She hath not seen that change of fourteen years; let two more summers wither in their pride," Capulet tells Paris about his past such as that Juliet is the rest of them have died. ...read more.

Juliet's relationship changes with her parents when she gets married to Romeo, in the way that she disobeys her father and goes behind her parents back, she know that they will not understand her love for Romeo. Lord and Lady Capulet does not seem to understand Juliet, I no this because they think that to make her happy get her married to Paris, "The gallant, young, and noble gentleman, The County Paris, at Saint Peter's Church, Shall happily make thee there a joyful bride." Lord and Lady Capulet wants Juliet wants Juliet to get married to Paris because of his wealth and power. Even the nurse thinks that Juliet should marry him. Juliet's mother reacts in an unaffected way when Juliet refuses to marry Paris, Lady Capulet tells her to talk to her father, and seems dismissive to her daughter. When Lord Capulet first enters he is quiet sympathetic. ...read more.