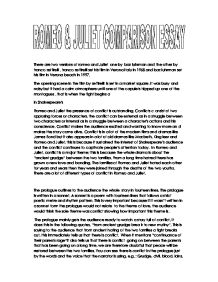 There are two versions of romeo and Juliet one by baz luhrman and the other by franco zeffirelli . franco zeffirelli set his film in Verona Italy in 1968 and baz luhrman set his film in Verona beach in 1997. The opening scene in the film by zeffirelli is set in a market square. It was busy and noisy but it had a calm atmosphere until one of the capulets tripped up one of the montagues . that is when the fight begins a In Shakespeare's Romeo and Juliet the presence of conflict is outstanding. Conflicts consist of two opposing forces or characters, the conflict can be external as in a struggle between two characters or internal as in a struggle between a character's actions and his conscience. Conflict makes the audience excited and wanting to know more and makes the story come alive. Conflict is in a lot of the modern films and dramas like James Bond but it also appears in a lot of old dramas like Macbeth, King ...read more.

The prologue mainly gets the audience ready to watch a story full of conflict, It does this in the following quotes, "from ancient grudge break to new mutiny", This is saying to the audience that from ancient hating of the two families a fight breaks out, this immediately tells us that there is conflict. When it mentions "continuance of their parents rage"it also tells us that there is conflict going on between the parents that has been going on a long time, we are therefore doubtful that peace will be restored between the two families. You can see there is conflict in the prologue just by the words and the voice that the narrator is using, e.g.: Grudge, civil, blood, loins, death, bury, strife. If you take the word "death", immediately the audience would think there could be conflict in this drama. "From ancient grudge break to new mutiny, where civil blood makes civil hands unclean", from this passage we are therefore made aware from the beginning that an old quarrel exists, a new fight has broken out and people have been killed. ...read more.

In Shakespeare time, if you said do you bite your thumb at me it would be very offensive and people would take it as an insult. Benvolio asks Tybalt to help him keep the peace, but Tybalt answers, "What, drawn, and talk of peace! I hate the word, as I hate hell, all Montague's, and thee: Have at thee, coward!"."Have at thee" is what you say as you attack, and Tybalt attacks Benvolio. Instead of stopping the fight, Benvolio has to join it. As soon as Tybalt and Benvolio begin fighting, some citizens, who are sick of both the Capulet's and Montague's, join in. This is a major part of conflict in the drama. The Prince is outraged at the beastliness of his citizens. He tells us this when he says "Capulet and Montague have thrice disturbed the quiet of our streets". "Pernicious" means more than "bad"; it means persistently, progressively bad. To control his beastly citizens, the prince has to threaten them with torture. From this we can see why Act 1 scene 1 interests the audience, it is because of all the conflict in this first act is amazing. ...read more.