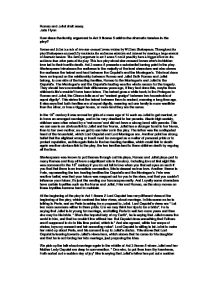 How does the family argument in Act 3 Scene 5 add to the dramatic tension in the play?

Romeo and Juliet is a tale of two star-crossed lovers written by William Shakespeare. Throughout the play Shakespeare successfully maintains the audiences attention and interest by creating a large amount of dramatic tension. The family argument in act 3 scene 5 could possibly have a bigger effect on the audience than other parts of the play. Thisis a play about star-crossed lovers who's forbidden love led to their horrific death. Act 3 scene 5 presents a substantial turning point in the play. Shakespeare introduces the audience to the majority of the lead characters and also shows the audience the hatred and feud between the Capulet’s and the Montague's. This feud does have an impact on the relationship between Romeo and Juliet. Both Romeo and Juliet belong, to one side of the feuding families, Romeo to the Montague’s and Juliet to the Capulet’s. The Montague’s and the Capulet’s feuding was the whole reason for the tragedy. They should have reconciled their differences years ago, if they had done this, maybe there children’s life’s wouldn’t have been taken. The hatred goes a while back, In the Prologue to Romeo and Juliet, the Chorus tells us of an "ancient grudge" between two households of equal dignity”. This states that the hatred between them is ancient, meaning a long time ago. It also says that both families are of equal dignity, meaning not one family is more wealthier than the other, or has a bigger house, or more land they are the same.

In the 16th century it was normal for girls of a mere age of 14 such as Juliet to get married, or to have an arranged marriage, and to be very obedient to her parents. Also in high society, children were often raised by a ‘wet nurse’ and did not have a strong bond with parents. This we can see is an obvious link to Juliet and her Nurse, Juliet has a stronger bond to her Nurse, than to her own mother, as we get to see later on in the play. The father was the undisputed head of the household, which Lord Capulet and Lord Montague are. Another point is a strong belief that the slightest wrong or insult must be avenged as a matter of personal pride or to protect reputation, as this again links to the two feuding families, which could link to death again another obvious link to the play, the two families lead to there children death by arguing all the time.

Shakespeare was known to put themes through out his plays, Romeo and Juliet plays part to many themes and they all have a significant role in the story. Including love at first sight this was command in the 16th century if you do not fall in love when you first set eyes on each if you that that there is an immediate connection, this is classed as true love. Another  theme is Hate, representing the two feuding families the Capulet’s and the Montague’s. Fate was another belief, was that your future was mapped out for you in the stars, and that you couldn’t influence your future; it’s just like reading our horoscopes really. And Loyalty some characters have certain loyalties such as the Nurse and Juliet, Friar and Romeo, as the story moves on these loyalties become hard to maintain.

At the beginning of the play in Act 1 Scene 2 Lord Capulet has very different views at the beginning of the play, which contrast the later views, about marriage. In this scene as he is talking to Paris, and as Paris is asking for a proposal to Juliet. Lord Capulet’s views are “ Let two more summers wither in there pride. Ere we may think her ripe to be a bride”. He is saying that Juliet is to young for marriage, and telling Paris to wait two more years and then she may be his bride. “ She’s the hopeful lady of my Earth”, he is saying that Juliet means the world to him, and that he couldn’t live without her. But Capulet does something that Fathers aren’t supposed to do in this time period, which is “ And she agreed, within her scope of choice, lays my consent and fair according voice”. Lord Capulet is willing to let Juliet to make her mind up about Paris, and his consent is up to Juliet’s choice. This shows that Lord Capulet is leaning towards Juliet’s views here, which shows that he cares for his daughter and that he is not forcing her into marriage, just proposing the idea.

We pick up the talk about marriage again in the middle of Act 3 Scene 5 where Juliet and her Mother Lady Capulet are deep in conversation. “ One who, to put thee from thy heaviness, Hath sorted out a sudden day of joy” She is saying that Juliet’s father has put out a sudden day of joy. “ Marry my child, early next Thursday morn…shall make thee a joyful a bride”. As an audience we react these couple of lines as how can she marry to the County Paris, if she is already married to Romeo? This is called dramatic irony when the audience knows more than the characters.  So Lord Capulet has totally changed his mid bout marriage, before he says saying Paris you will have to wait two more years but now he has changed it to Thursday only four days away. Then Juliet responds “ … He shall not make me there a joyful bride…I wonder at this haste, that I must wed…”Ere he that should be husband comes to woo”. Juliet is astonished at why she has got to marry so fast, and she’s saying well shouldn’t he come and win my heart and get to know me before I accept?  “ It shall be Romeo, whom you know I hate, Rather than Paris. These are news indeed”. Even though Juliet is saying that she would rather get married to Romeo, we know that she all ready is, and that she doesn’t hate him at all, she loves him.  Then Lord Capulet and the Nurse enter the room “ How now, a conduit girl? What, still in tears? Lord Capulet is being a concerned, caring and affectionate father now, but this soon changes.  As Lord Capulet asks his wife about how as she taken the news, Lady Capulet says she no but says thank you.  Juliet speaks “ Not proud you have, but thankful that you have”. “ But thankful even for the hate that is meant love”. Then Lord Capulet answers how dare you disobey me, spoilt brat, if you don’t go I will drag you there myself. He even calls her a “sickness-carrions meaning rotten meat, baggage, and tallow face meaning pale face. This is a total turn around from how understanding, caring he was a couple of seconds ago, and how he was saying to Paris “ She’s my hopeful lady of my earth”.  Now it has changed to rotten meat! Then Lord Capulet gets really angry “Hang thee, young baggage, disobedient wretch” Get yourself to the church on Thursday or never speak to me again. “ My fingers itch” now he is so angry that he wants to hit her. And that she was a curse to have! The audience would probably feel sympathetic to Juliet now, because its not just that she doesn’t want to marry Paris it is the fact that she is already married, to Romeo. As this scene continues Lord Capulet is fuming with Juliet, as this scene is vital for the dramatic implications to the rest of the play. Nearing the end of this feud Juliet shouts “. Or if you do not, make the bridal bed, in the dim monument where Tybalt lies”. Here Juliet is foreshadowing the future, because infact she does die. Lady Capulet then says “ Talk to me not, for ill not speak a word… I have done with thee”. At this moment in time, not only her father has left her, so has her mother. So then Juliet turns for to the Nurse for some advice. But the nurse’s advice is to forget about Romeo and just to marry Paris. I think that the Nurse might just be saying this because she played a role in the marriage of Romeo and Juliet so she is frightened that she might be discovered. So even though there are many loyalties through out the play, which seem to be genuine, would someone break the trust, just to save himself or herself? “ Marry, I will, and this is wisely don’t” says the nurse, so the Nurse thinks that Juliet has taken her advice thinking that she is complaint and obedient. But then Juliet says “ If all else fail, myself have the power to die”, this is also dramatic tension because this conversation has now brought Juliet to think about killing herself, so she doesn’t have to marry Paris. Juliet increasingly feels trapped. So she is so desperate that if the Friar won’t help herm then she sets about making the plans that will lead to her tragedy. Her father has threatened her, her mother has abandoned her, and she feels like the nurse has proved a false friend, as the nurse has always been like a Mother to her, I think that the Nurse letting her down affects her more than her own Mother letting her down.

In conclusion, at the start of the play in the prologue we already know that two “star crossed lovers” are going to take their life. The term in meaning star crossed suggests that their paths were never meant to intertwine with each other and if they did it would only result in tragedy. This main argument did contribute dramatically to the final tragedy, which was Juliet taken her own life, Romeo also taking his own life. So in my opinion the two families were to blame, if they didn’t constantly hate each other maybe their children wouldn’t have dies just to be with each other.