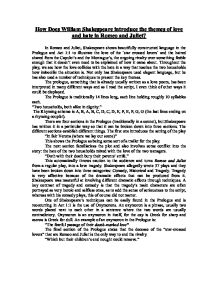 How Does William Shakespeare introduce the themes of love and hate in Romeo and Juliet? In Romeo and Juliet, Shakespeare shows beautifully constructed language in the Prologue and Act 1:1 to illustrate the love of the `star crossed lovers` and the hatred shared from the Capulet's and the Montague's, the ongoing rivalry over something feeble enough that it doesn't even need to be explained of how it came about. Throughout the play, we see how the love collides with the hate in a way that teaches the two households how imbecilic the situation is. Not only has Shakespeare used elegant language, but he has also used a number of techniques to present the key themes. The prologue, something that is already usually written as a love poem, has been interpreted in many different ways and as I read the script, I even think of other ways it could be displayed. The Prologue is traditionally 14 lines long, each line holding roughly 10 syllables each. "Two households, both alike in dignity." The Rhyming scheme is A, B, A, B, C, D, C, D, E, F, E, F, G, G (the last lines ending on a rhyming couplet). There are four sections in the Prologue (traditionally in a sonnet), but Shakespeare has written it in a particular way so that it can be broken down into three sections. ...read more.

Baz Luhrmann first presents the Prologue as a news report. This gives off a modern day equivalent of the Prologue, showing instantly how Luhrmann has decided to direct the film. After the news report, the prologue is repeated as an over voice. The voice gives off the same omniscient feel as in Franco Zeffirelli's version as it has been placed in the hands of Friar Lawrence. This is a cleverly picked character, as it is one who has an alliance with God, and therefore appears even more Godly. The Prologue is such a crucial element to the script, as it outlines the entire play and foreshadows future events; therefore the way different productions have presented is very important. Act 1:1 starts with Samson and Gregory in `a public place`, acting jokily and being troublesome. This is apparent from when `two serving men` from the house of Montague enter. Different interpretations of the characters entrances symbolize what the directors see the characters as. In Luhrmann's version, the Montague's and Capulet's are described as the "boys" giving the sense that the rivalry and arguments of the two households are pretty petty and childish. The `Montague Boys` act in a childish way themselves, which creates a great contrast to the other, deadly serious half of the scene. It also makes a huge contrast to the Capulets when they enter. ...read more.

When the fight had been calmed by the Prince and when the air was cleared, Lady Montague asked: "O where is Romeo? Saw you him today?" Romeo, one who has not been involved in this `quarrel` in anyway, is still pining over his current love: Rosaline. As Romeo enters the scene, he is filled with love. As he talks with Benvolio, thoroughly disappointed with the fight that had just occurred, through Shakespeare, oxymorons are reintroduced. Romeo does not comprehend the ongoing rivalry, the torment and hatred and so he says: "Feather of lead, bright smoke, cold fire, sick health" This is poetically used to contrast the household's violence to his love for Rosaline. As the plot moves on, the love for Rosaline is replaced by Juliet, where the love is much greater, and as the love grows, uncannily, the rivalry grows at the same scale. The theme of Romeo's hastiness is clear as he jumps from love to love, and again clear as he rushes into marriage with Juliet. Romeo and Juliet has such a big mixture of emotions because it has three excessive themes that all join in together ruining the paths of each character. These themes are: tragedy, romance and rivalry and they keep Shakespeare's most familiar tragedy one of the most interesting and enchanting script of all time. ...read more.