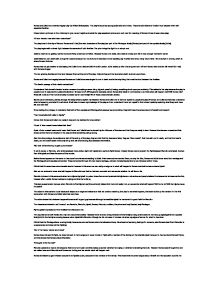 Romeo and Juliet is a romantic tragedy play by Willam Shakespeare. The play is about two young adults who are in love. They are both victims of a bitter feud between their well-respected families. I have looked up Romeo in the dictionary to give me an insight as to what the play was about and as soon as I read the meaning of Romeo I knew it was a love play: "A hero- hence a man who is an ardent lover" The play is set in the city of Verona. Romeo and Juliet (the main characters of the play) are part of the Montague family (Romeo) and part of the capulets family (Juliet). The play begins with a street fight between the servants of both families. The price brings the fight to an abrupt end. Juliet is meant to be getting married to Count Paris, chosen by her father. However Romeo and Juliet, who meet at a ball, soon fall in love and get married in secret. Juliet fakes her own death with a drug friar Lawrence issued her and is found in bed dead on her wedding day in which she is too marry Count Paris. She is buried in a tomb, which is where Romeo finds her. Romeo has not yet received a note saying that Juliet is not dead and kills him with poison. ...read more.

I think that this scene has more dramatic tension because in this scene we are really on edge as to what will happen to Romeo now that he has murdered tybalt. Also we are anxious to know what will happen to Mercutio now that he has been wounded and we wonder whether he will live or die. Mercutio is brave in this scene and when he is injured by tybalt he puts a brave face on and pretends his injuries are not serious and people believe him because he is known as the fool, however after a while Romeo realises he is lying and that he is dieing. This also causes tension because when Mercutio is first injured we (the audience) believe that he is not really hurt, so we wonder what will happen? Will he be ok? Will his injuries cause his death? The action in this scene is crucial because it keeps us on edge and makes sure that we continue watching the play to see what happens, the action builds up the tension for the final scene when both Romeo and Juliet take their own lives. The action shows that whatever happens Romeo is still a good guy because although he has killed tybalt he has done it in good faith for Mercutio. ...read more.

As a result of this the capulets and Montague's promise never to feud again: "Poor scarifies of our enmity" I have learnt hat dramatic tension is as I thought it to be; it is something that is big, powerful but also keeps the viewers on edge because we wonder constantly what will happen next. In this play there are lot of themes. The themes involved are: Disorder - this is a theme because there is fighting, anger, passion and false love (between Juliet and Paris) disorder means: "A lack of order or confusion" There is light and darkness because there is death, violence, sadness and secrets. Lightness is represented by the love between Romeo and Juliet. Darkness id represented because Romeo is sad and depressed and the sadness at the end of the play of the lover's death. Light is represented by love, life and hope. Darkness means: "Gloomy, dismal, sullen, threating, obscure, mysterious, evil, in secret" Light means: "A way of looking at or considering a matter; aspect" There is also love and passion because Romeo is in love with Juliet and passion because lady Capulet is only in her marriage because it makes her wealthy and noticeable. Romeo also shows passion regarding his feeling for Mercutio when he kills tybalt in revenge. Love means: "Deep affection and warm feeling for one another" Passion means: "Strong desire or lust" Overall I think that the play is very dramatic. The other themes as well are lies, deceit, truth, love and hate. ...read more.