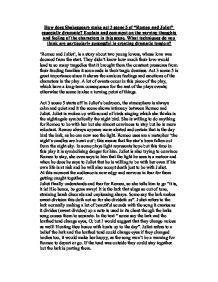 How does Shakespeare make act 3 scene 5 of "Romeo and Juliet" especially dramatic? Explain and comment on the varying thoughts and feeling of the characters in this scene. What techniques do you think are particularly successful in creating dramatic tension? 'Romeo and Juliet', is a story about two young lovers, whose love was doomed from the start. They didn't know how much their love would lead to so many tragedies that it brought them the constant pressures from their feuding families it soon ends in their tragic demises. Act 3 scene 5 is great importance since it shows the anxious feelings and emotions of the characters in the play. A lot of events occur in this piece of the play, which have a long-term consequence for the rest of the plays events; otherwise the scene is also a turning point of things. Act 3 scene 5 starts off in Juliet's bedroom, the atmosphere is always calm and quiet and it the scene shows intimacy between Romeo and Juliet. Juliet is woken up with sound of birds singing which she thinks is the nightingale symbolically the night bird. She is willing to do anything for Romeo to be with her but she almost convinces to stay but he is more reluctant. Romeo always appears more alerted and certain that is the day bird the lark, as he can now see the light. Romeo uses are a metaphor 'the night's candles are burnt out'; this means that the star's been fallen out from the night sky. In some plays light represents hope but this time in this play it is symbolising danger for him. Juliet is also trying to convince Romeo to stay, she even says to him that the light he sees is a meteor and when he does he says to Juliet that he is willing to be with her even if his own life is at risk and he will also accept death just to be with Juliet. ...read more.

- God pardon him! I do, with all my heart; and yet no man like he doth grieve my heart'. The audience or the theatre viewers are on the edge at this point because they would be wondering if Juliet's double meanings would give away her true feelings about her supposed to be enemy in front of her mother. Lines 78-80 they lack a lot of intimacy between a mother and a daughter is shown again as they refer to each other in a conversation as 'madam' and 'girl'. This hints show that lady Capulet will not support or help her daughter Juliet when she really needs her to do so. The intimacy between Juliet and her parents is little because it is shown again when her mother Lady Capulet tells Juliet that her father has away to cheer her up, by making plans for Juliet to marry Paris. Juliet lived in the time of the patriarchal society so she had no choice in the matter. Husbands were brought to bring families together not to be a love match. Juliet is shocked by the news that her mother told and she was unaware that her parents would do that to her and the audience wonders when she finds out, when this is said it builds up the suspense of the scene, at this point we the audience don't know how Juliet is going to take this or what she would to prevent her marrying Paris. Lady Capulet also describes Paris as a very well gentleman and as he is part of the patriarchal society he will be in charge of the wedding: 'marry, my child, early next Thursday morn, the gallant, young and noble gentleman, the county Paris, at saint Peter's church, shall happily make thee there a joyful bride'. Juliet is surprised by the news she was given by her mother and her anger towards this gives her mother Lady Capulet a hint of her love for Romeo: ' he shall not make me there a joyful bride. ...read more.

O, he's a lovely gentleman! Romeo's a dish clout to him: an eagle, madam, hath not so green, so quick, so fair an eye as Paris hath'. Juliet's nurse is being pragmatic in this quote saying that Juliet needs to make the best of a bad situation. Romeo is banished, probably will never return, so the better choice is for Juliet to marry Paris in this circumstances. Juliet is shocked at what her nurse is saying and by what she sees as the nurse's fickle attitude and feels that is turning against her, she now turns on her former companion, the one person she would be wither. ' Go, counsellor; thou and my bosom henceforth shall be twain. I'll to the friar, to know his remedy: if all else fail, myself have power to die.' At this point Juliet decides to go and see friar Laurence for help because of her relationship with her nurse has fallen apart, before this the nurse and Juliet were like mother and daughter but now the intimacy has gone from them. Juliet is angry and labels the nurse as a devil like; she keeps cursing her dramatically so the audience would be very shocked at this. Again the threat of suicide if there is no other way that friar Laurence would help resolve her dilemma gives a fearful to the scene's end, this makes the audience want to continue watching the play. Act 3 Scene 5 is really dramatic and it is were all the climax of the play is and it's also the main part of the play because that is were a lot of things happen and its also a turning point of the play. The characters and their wild emotions make this, along with the intensity in the scene and the range of effective language techniques like the ambiguous language and the metaphors they used to described things in an easy way. For this coursework I used my Shakespeare book throughout the whole coursework. ...read more.