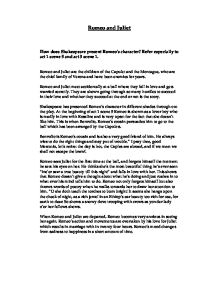 Romeo and Juliet are the children of the Capulet and the Montague, who are the chief family of Verona and have been enemies for years.

Romeo and Juliet meet accidentally at a ball where they fall in love and gets married secretly. They are shown going through so many hurdles to succeed in their love and whether they succeed at the end or not is the story.

Shakespeare has presented Romeo’s character in different shades through out the play. At the beginning of act 1 scene 5 Romeo is shown as a lover boy who is madly in love with Rosaline and is very upset for the fact that she doesn’t like him. This is when Benvolio, Romeo’s cousin persuades him to go to the ball which has been arranged by the Capulets.

Benvolio is Romeo’s cousin and is also a very good friend of him. He always tries to do the right things and stay put of trouble.” I pray thee, good Mercutio, let’s retire: the day is hot, the Caples are abroad, and if we meet we shall not escape the brawl.

Romeo sees Juliet for the first time at the ball, and forgets himself the moment he sets his eyes on her. He thinks she’s the most beautiful thing he’s ever seen “ine’er saw a true beauty till this night” and falls in love with her. This shows that Romeo doesn’t give a thought about what he’s doing and just rushes in to what ever his mind tells him to do. Romeo not only forgets himself but also throws words of poetry when he walks towards her to draw her attention to him. “O she doth teach the torches to burn bright! It seems she hangs upon the cheek of night, as a rich jewel in an Ethiop’s ear beauty too rich for use, for earth to dear: So shows a snowy dove trooping with crows as yonder lady o’er her fellows shows.

When Romeo and Juliet are departed, Romeo becomes very anxious in seeing her again. Romeo’s action and movements are overtaken by his love for Juliet which results in marriage with in twenty four hours. Romeo’s mood changes from sadness to happiness in a short amount of time.

So far Romeo has been shown as a lover boy but in act 3 scene 1 is where you see other side of Romeo. Act 3 scene 1 is where Romeo’s best friend Mercutio is killed by Tybalt, Juliet’s cousin. Mercutio is a very lively person; he’s full of energy and is always making jokes or teasing someone. Even when he knows he’s dying he still makes jokes “ask for me tomorrow, and you shall find me a grave man”.

Romeo gets very angry with Tybalt for killing Mercutio and kills him. This is where you begin to see Romeo’s dangerous side. He doesn’t think about what he’s doing he doesn’t think Juliet and the marriage either at that moment; all that’s in his mind is that his friend has been killed and he’s very furious about the fact that he let it happen.

Shakespeare has portrayed Romeo in a very romantic and soft way through out act 1 scene 5 and has hidden the other side of Romeo. Romeo’s character is hidden by his love in these scenes. In these scenes Romeo’s character fails to understand that there is another world beyond love. His love for Juliet becomes stronger although both their families are enemies, this shows that Romeo is not afraid of the consequences that he is to face in near time.

But in act 3 scene 1 Shakespeare has shown Romeo’s character in a much stronger way he has shown him as a person who is not afraid to fight to the death and is ready to do anything for his loved ones without thinking. So in these scenes Romeo has been shown as a lover boy, a strong person and also he’s been shown as a person who is not very steady with the decisions he seems to be making decisions without even thinking.

Shakespeare also made the characters of Benvolio and Mercutio to represent Romeo’s character in a way Romeo is like Benvolio a very soft character and doesn’t want to get in to trouble and in some scenes he‘s making fun with his two best friends like Mercutio.